Have a Hunched Upper Back? What to Know About Kyphosis 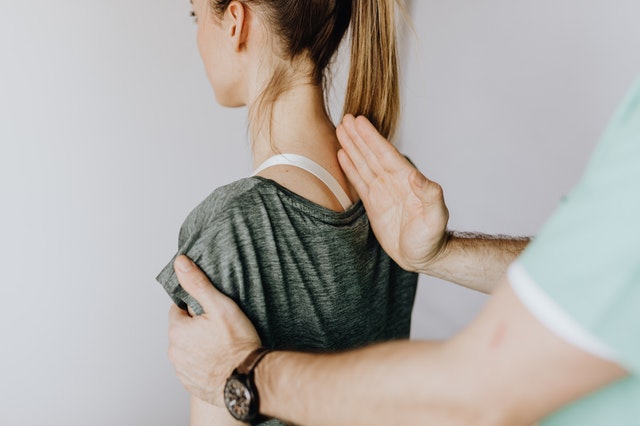 Kyphosis isn’t, technically speaking, a bad thing. The term describes any outward curve of the spine, ranging anywhere from totally normal to excessive (and anything in between).

While you may not have heard the term “kyphosis” before, you might’ve heard the less-kind nickname for serious rounding of the spine: a dowager’s hump. (An outdated term you should avoid.)

It’s so called because many people with the condition can have a humped or hunched back.

Setting appearance aside, there’s a reason to pay attention to this condition. Curvatures of the spine are important for balance, so if they are too large or too small, you’ll have a problem standing up straight.

Here’s what you need to know about the types of kyphosis, symptoms, treatments, and how to live with the condition.

Your spine and kyphosis

The spine is made up of 24 small, rectangular bones (called vertebrae) that are stacked on top of one another to form the spinal cord.

Between each vertebra, you’ll find discs. These soft, gel-like, flat and rounded cushions help absorb pressure and keep the bones from rubbing against one another.

All spines curve, both inward and outward.

Doctors measure the angle of kyphosis from the first thoracic bone in the spine to the 12th thoracic bone. A normal kyphosis angle ranges from 20 to 40 degrees.

If the angle measurement is greater—especially more than 60 degrees—you have an abnormally curved spine, or hyper-kyphosis.

“It’s less common in young children than in adolescents, adults, or older people, and becomes more common in post-menopausal women, who tend to lose bone mass at three times the rate as men,” he adds.

Kyphosis can cause some real issues. When acute, the rounding of the back creates weakness in the spinal bones that cause them to crack or compress.

There are a few different types of kyphosis, and while they all feature a hunched or rounding of the upper back, the symptoms can vary.

One type may not cause pain at all, while another can be very painful.

Postural kyphosis is the most common and becomes noticeable when teens tend to slouch, stand poorly, and spend too much time hunched over computers, phones, and video games.

This condition is not painful.

“We’ve been seeing a lot more postural kyphosis due to the Covid-19 pandemic because children have been forced to sit at computers for six to eight hours a day for remote schooling,” says John S. Blanco, MD, a pediatric orthopedic surgeon at the Hospital for Special Surgery in New York City.

He says the condition is more common in adolescent boys, who tend to spend more time video gaming than girls.

Named after a Dutch radiologist who first described the condition, Scheuermann’s kyphosis (or Scheuermann’s disease) can cause severe deformity and be painful. It’s caused by a structural abnormality of the spine.

Instead of the normal rectangular shape, several vertebrae become wedge-shaped, decreasing normal disc space and creating an exaggerated sharp, angular, stiff forward curvature in the back.

Pain is usually felt at the site of the deformity and may also be felt in the lower back if it develops excessive lordosis (swayback).

“Scheuermann’s Kyphosis can appear in juveniles and adolescents and is caused by abnormal growth, which is the result of excessive stresses,” says Dr. Blanco. “A person can also progress from postural kyphosis to Scheuermann’s kyphosis.”

It occurs when the spinal column hasn’t developed normally in utero and either the bones haven’t formed completely as they should have, or vertebrae are fused together in the front of the spine.

Children with congenital kyphosis can have other birth defects of the heart or kidneys, and the condition can worsen as they age.

In adults, the most common causes of kyphosis can be degenerative diseases of the spine (like arthritis or disc degeneration), fractures caused by osteoporosis or injury, or kyphosis conditions not treated in adolescence.

“As people age, they tend to walk more forward normally and may end up seeing a doctor because they’re experiencing spinal pain,” says Dr. Rand.

The most common symptoms of kyphosis are pain in the middle or lower back.

You may notice a rounded back appearance, tenderness or stiffness in the spine, fatigue, and in severe cases, difficulty breathing, limited physical functions, and digestive problems.

How is kyphosis diagnosed?

Discomfort and physical appearance are usually the reasons people look to physicians for help.

Your doctor will evaluate and examine your spine to determine if the cause of your curvature is postural or structural, says Dr. Blanco.

You may need to bend forward, which lets your doctor see how rounded your spine is. You may also need X-rays to measure the angle of the curvature of the spine and determine the severity of the problem.

Your doctor will for any other signs of spinal deformity. Many have associated scoliosis with kyphosis, Dr. Blanco says.

“In those with congenital kyphosis, an MRI scan is frequently ordered to evaluate the spinal cord anatomy,” he says. “And in growing children, kyphosis needs to be followed.”

Treatment for kyphosis depends on the cause of the disorder and your age.

Postural kyphosis is usually treated with physical therapy and a focus on good posture, says Nikhil Jain, a neurosurgery spine fellow in the Department of Neurological Surgery at the University of Louisville in Kentucky.

Treatment for kyphosis in adults and kids

In adults, kyphosis correction is often part of a procedure to correct scoliosis, says Dr. Rand.

Other treatments depend on the nature of the underlying abnormality of bone development. Those with severe or progressive kyphosis require surgery to correct the deformity early on, says Dr. Jain.

It’s a serious surgery, which is why it’s reserved for severe cases of kyphosis. “When kyphosis treatment is surgical, there’s a risk of spinal cord injury at the time of correction,” says Dr. Blanco.

Scheuermann’s kyphosis can be treated with a brace or physical therapy when the kyphosis is less than 70 degrees.

A brace can help stop the progression of the kyphosis if the child is still growing.

More-severe curves are difficult to correct and cannot be improved with nonoperative measures. “In many cases, if the kyphotic angle measures more than 75 degrees, corrective surgery is required,” Dr. Jain says.

He says surgery for involves cutting the thoracic bone (a procedure called osteotomy), then straightening out the spine by inserting a metal rod and fusing bone cuts together with screws and rods for stability.

In growing children, treatment is directed at symptom relief and prevention of progression.

Surgery for congenital kyphosis consists of in situ fusion, where the aim is to stop the growth of the kyphotic spine without any correction of existing kyphosis, Dr. Jain says.

The other procedure is an osteotomy and fusion with screws and rods where correction of the kyphosis is achieved.

The choice, adds Dr. Jain, depends on the age of the patient and the severity of kyphosis.

What’s the outlook for kyphosis?

How kyphosis will affect your life depends on the cause of kyphosis, says Dr. Jain.

There’s a greater chance that congenital kyphosis leads to severe kyphosis than other types of kyphosis in adolescents and adults.

“Additionally, there may be associated neurological deficits or abnormalities in other organ systems, which can complicate management,” he says.

Growing up with kyphosis

Most adolescents with Scheurmann’s kyphosis have mild to moderate curves and tend to do well with nonoperative management, says Dr. Jain.

The progression of Scheurmann’s kyphosis is dependent on bone growth, so once kids complete their growth spurt during puberty, the disease generally stops.

Dr. Jain says those with severe curves who need surgery also do well with modern surgical techniques and technology like screws, rods, and fusion.

In fact, Dr. Rand pioneered a method of correcting hyper-kyphosis in adolescents.

At the time of back surgery, small gaps are created between the vertebrae and then closed with a screw-and-rod system to straighten the curvature. At the same time, a fusion of the spine is done to close gaps between segments.

“In older people,” says Dr. Rand, “painful kyphosis is harder to fix because the bones have become more fragile, and surgical correction is more difficult.”

You’ll want to work with your doctor and surgical team to find the right treatment for your kyphosis.

Kyphosis doesn’t tend to cause serious issues, but it can lead to several difficulties, like breathing problems and pain.

Talk with your doctor to determine what treatment plan can work best to alleviate your pain and improve symptoms.

The post Have a Hunched Upper Back? What to Know About Kyphosis appeared first on The Healthy.

What You Should Know About Carcinogens and Toxic Ingredients

What Is Insomnia Light Therapy? Here’s How It Works

Does an Apple a Day Really Keep the Doctor Away?

Sea Moss Benefits and How to Use It