Does Metformin Cause Weight Loss? What to Know Before You Take It 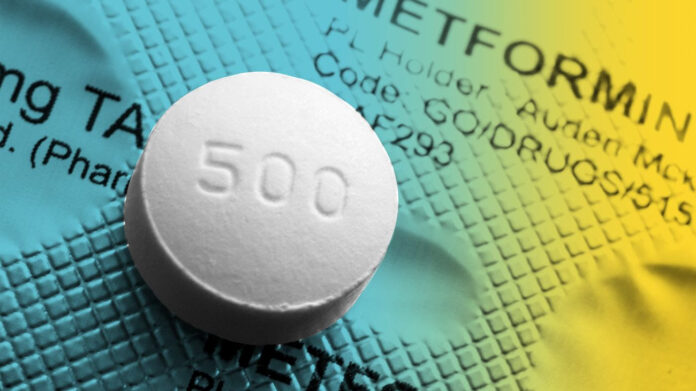 Struggling to lose weight? Metformin can do more than help control your blood sugar — it may also help you lose stubborn pounds. Here’s what you need to know about metformin and weight loss.

If you’re managing type 2 diabetes with metformin (Glucophage), you might be well acquainted with unwanted side effects of this drug — namely, upset stomach, diarrhea, muscle aches, and sleepiness. These can be a figurative and literal pain, but you might welcome one side effect of metformin with open arms, particularly if you’ve struggled to lose weight.

Metformin isn’t a weight loss drug, but researchers have found a link between the drug and weight loss. A long-term study published in the journal Diabetes Care that was conducted by the Diabetes Prevention Program concluded that the drug could serve as a treatment for excess body weight, although more studies are needed.

Diabetes 101: What Is Metformin?

What Is Metformin and How Does It Work?

“[Metformin] has been considered a first-line medication in the treatment of type 2 diabetes, and it mainly acts by lowering the amount of glucose released by the liver,” says Minisha Sood, MD, a board-certified endocrinologist who’s based in New York City. “It also helps a hormone called insulin to work better by helping muscles use glucose in a more efficient manner. When insulin works better — and insulin sensitivity improves — a person’s insulin levels are lower than they would be otherwise.”

There’s no cure for type 2 diabetes, but the right combination of medication and a healthy lifestyle can stabilize blood sugar levels, which, of course, is the end goal of any diabetes treatment.

As the medication helps your body properly metabolize glucose from the breakdown of food and restores your ability to respond to insulin, you’ll not only feel better but you can potentially avoid complications of high blood sugar, such as heart disease, kidney damage, nerve damage (diabetic neuropathy), and eye damage (retinopathy).

Why Does Metformin Cause Weight Loss?

The relationship between metformin and weight is unclear, but several theories provide possible explanations for weight fluctuations. Reduced hunger is one documented side effect of metformin, according to the Mayo Clinic.

For example, metformin may affect hunger cues. In one small study, 12 women with obesity and type 2 diabetes who were not taking insulin were randomly given two dose levels of metformin — 850 milligrams (mg) or 1,700 mg — or a placebo three times a day for three days, with each participant going through the study three times so they had each dose and the placebo. Participants received a meal test on each third day and rated their hunger level before eating. Researchers found that hunger levels in the metformin group were significantly lower, especially after the participants took the 1,700 mg dose compared with when they were taking the lower metformin dose or placebo.

If you take metformin, it might not appear as if you’re eating less with this drug. But the number of calories you’re currently consuming for breakfast, lunch, and dinner might be lower than your normal food intake. This subtle change in appetite could be responsible for a gradual decline in weight.

Having a frequent upset stomach or diarrhea, which is another side effect of the drug, can also affect your food intake.“Temporary gastrointestinal upset, typically experienced at the beginning of treatment, from taking metformin may also play a role in weight loss,” says Suzanne Magnotta, RD, CDCES, vice president of clinical services for Achieving Better Control in Conshohocken, Pennsylvania.

According to a study published in the April–June 2017 issue of the Journal of Research in Pharmacy Practice, gastrointestinal side effects are a primary complaint from those who receive metformin tablets in their original formulation. The most common symptoms are vomiting, diarrhea, and nausea, which affects about 2 to 63 percent of people on the drug. Discomfort can be so severe that you may not feel like eating much and subsequently consume fewer calories. The extended release forms of metformin have documented fewer side effects in studies.

Even though metformin can help you shed pounds, the amount you lose might be far less than expected. On average, weight loss after one year on the drug is only 6 pounds, according to the Diabetes Care study.

So while metformin is often given to people with high insulin levels who have difficulty losing weight, it’s not a miracle weight loss solution, says Dr. Sood. In other words, don’t expect a dramatic change in weight if you overeat and lead a sedentary life. You must follow a sensible weight loss plan with healthy eating and physical activity to see any significant change in weight.

“If someone isn’t following healthy habits, then taking metformin will not result in weight loss,” she says. “It’s important to follow a healthy diet low in refined sugars and carbohydrates if [you are] prone to high insulin levels so that maximum benefit from the medication is received.”

Keep in mind that while the number on the scale might drop while taking this medication, this weight loss may be temporary. You could regain pounds once you stop taking the drug and your appetite returns to normal, hence the importance of sticking with a healthy lifestyle.

If you’re thinking about taking metformin with a weight loss medication, ask your doctor for recommendations. This combination could help you lose and keep off additional pounds, although there’s little to no clinical trial data to support this claim, says Sood.

Can People Without Diabetes Take Metformin?

What if you don’t have type 2 diabetes? Can you still take metformin for weight loss? This is an excellent question, and the short answer is yes. Sood explains that metformin has been used off-label, or outside its intended purpose, for weight management.

In fact, a review published in December 2018 in the European Journal of Clinical Pharmacology examining the efficacy of metformin for weight loss in overweight and obese people without diabetes concluded that the drug could significantly decrease body mass index in both adolescents and adults.

But because this drug is only available by prescription and hasn’t been approved for weight loss by the Federal Drug Administration, your doctor will likely first recommend some of these traditional strategies for weight loss:

“For those patients with diabetes who can’t take metformin, due to chronic kidney disease or other concerns, diet and lifestyle modifications will still be of utmost importance, whether they’re prescribed alternate medication or not. Controlling carbohydrate intake, increasing physical activity, and managing stress is the cornerstone of improving glycemic control,” says Magnotta.

“Make it a point to stand up every hour or so and walk around the room, the yard, or the block. Little bits of physical activity over the day add up, resulting in the burning of more calories as a result,” she says.

The Bottom Line on Metformin and Weight Loss

All things considered, metformin can cause a modest reduction in weight, most likely due to side effects, like a decreased appetite and an upset stomach. But although effective for weight loss, the drug doesn’t replace traditional dieting methods. So if you’re looking to lose more and keep the weight off longer, you have to get active and eat right.

Previous article7 Home Remedies to Stop a Bad Cough
Next articleIs It Safe to Travel This Summer?
RELATED ARTICLES
Health

Is It Safe to Travel This Summer?

Got a Tight Neck? Here’s How to Do a Levator Scapulae...