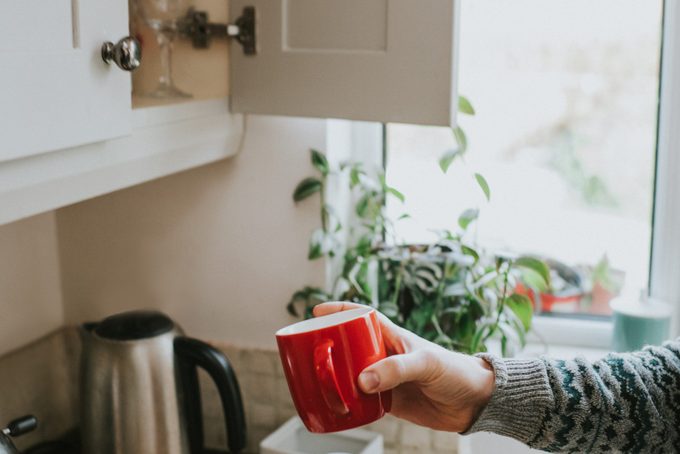 How gross is it to reuse a coffee mug?

That’s why it’s tempting, after you finish your coffee, to leave your mug on the counter until tomorrow. That cup of joe is just flavored water, after all—what could go rancid?

Adam Possner, MD, of Rockville Concierge Doctors, says if you’re drinking black coffee—no milk, no sugar—then there’s not much for “bacteria or other badness to subsist upon,” especially if you leave the cup out to dry between uses.

In fact, that’s how Dr. Possner rolls. He drinks his coffee black and doesn’t bother to wash it day-to-day.

Nevertheless, his office manager isn’t pleased, and Dr. Possner has often wondered whether washing out the mug might not lead to a better-tasting coffee.

What are the potential risks?

Speaking of the office, research from the University of Arizona suggests that when you leave your mug in a communal kitchen (which we imagine is what you have at the office), you’re running the risk of your mug collecting a lot of unwanted bacteria.

And not just because your coworkers may mistake your coffee mug for their own, says Peter F. Bidey, DO.

What about the idea that a little extra bacteria could even benefit your overall microflora?

“Not washing a coffee mug for days while you continuously reuse it not very hygienic and you could be prone to getting sick from it, including from mold exposure,” says Atlanta-based integrative medicine physician Bindiya Gandhi, MD.

“They float in the air and can land in your cup and grow in between the times you use your cup,” Dr. Marty says.

And if you add cream or you tend to dunk food in your coffee, you’re providing the perfect environment for microbial life to flourish.

“I’ve personally tested coffee cups that are not cleaned daily and found [not just bacteria, but] fungi. This not only can cause infection, it can trigger an allergic reaction.”

You can get away with not washing your coffee cup between uses if, like Dr. Possner, you drink it black. He says he hasn’t gotten sick from it “yet.”

But only if you’re drinking your coffee alone in your own kitchen, sans milk, sans sugar, and not dunking anything into your dark, delicious brew.

The post Do You Need to Wash Your Coffee Mug Every Day? appeared first on The Healthy.

Can You Sneeze in Your Sleep? It Depends

What Is a Chlorine Rash? Experts Explain Why Your Skin Might...

How to Fix Your Sleep Schedule

A Matcha Smoothie Recipe This Dietitian Makes on Repeat