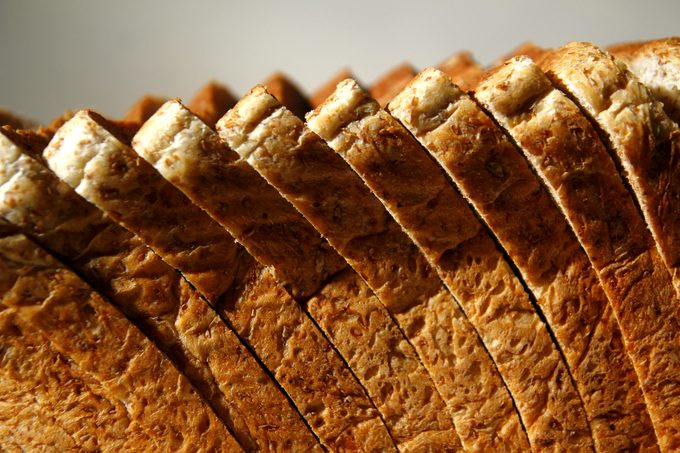 What is Ezekiel bread exactly?

But in case you’re new to this cult-favorite baked good, here’s a recap: it’s a delicious type of whole grain and vegan bread made from sprouted grains.

According to Seattle-based registered dietitian nutritionist Ginger Hultin, owner of Champagne Nutrition and author of Anti-Inflammatory Diet Meal Prep, because Ezekiel bread is sprouted and made from whole grains, it’s a good source of fiber. And the benefits of fiber range from gut health to lower cholesterol levels.

That’s just the start of what makes this such a healthy bread.

Ezekiel bread has protein and is a good source of nutrients, says Hultin, including the mineral selenium, which acts as an antioxidant.

Although many whole-grain breads have whole wheat flour, Ezekiel bread also includes barley, beans, lentils, millet, and spelt. It’s made with sprouted soybeans and lentils too.

Hold up, you’re saying. I get the whole “bread” concept, but what on earth does it mean to be “sprouted”?

That has to do with the grains.

“The nutrient and antioxidant content of grains increases during sprouting,” he says, adding that sprouting also decreases the seed’s level of phytic acid.

This compound limits your ability to absorb certain minerals, so a diminished amount means that the nutrients in sprouted bread are more available to your body. With a decreased phytic acid content, magnesium, iron, and zinc are more available.

The sprouting process also leads to a slight increase in polyphenol antioxidants, according to the journal Nutrients.

It’s no wonder, then, that according to a 2017 survey by market research firm Global Data, 60 percent of American shoppers associate sprouted grains with positive health benefits.

Each slice of Ezekiel bread is packed with nutrients. Here’s a look at the nutrient breakdown, plus the daily value (DV) of certain nutrients each slice contains, based on a 2,000-calorie diet:

These other Ezekiel products provide the same nutrients, although the amounts may differ slightly.

Ezekiel bread is low in sodium

Ezekiel bread also stands out because it has no added sugars and is low in sodium.

In fact, it has less than half the sodium of other popular whole-grain bread brands.

This is noteworthy since 40 percent of the sodium we consume comes from just 10 foods, including bread, according to the Centers for Disease Control and Prevention.

Simply put, you need to be in a calorie deficit to lose weight. That means you consume fewer calories than you expend.

It’s relatively common to find a slice of whole-grain bread with 110 calories, so swapping a higher-calorie bread for a lower-calorie one could help promote the calorie reduction needed for weight loss.

Hultin explains that some research shows that when people start eating whole grains like Ezekiel bread or other whole-wheat products instead of refined (white) grain products, they may lose weight.

“Fiber and whole-grain foods are filling, nutrient dense, and help you feel satisfied, so those are some of the potential reasons why [Ezekiel bread may help you lose weight],” Hultin says.

Ezekiel bread also happens to have five grams of protein per slice, or 10 grams per sandwich.

Not only that, but it’s complete protein, which means you’ll get all nine essential amino acids your body needs to get from food. (For comparison, a slice of whole wheat bread has 3.6 grams.)

Protein helps you feel fuller than the other macronutrients (carbs and fat). Research in the journal Food Chemistry found that the protein content of quinoa-enriched bread may help slow the digestion of the carbohydrates in the bread, keeping you full longer.

Eating a protein-rich diet may also help preserve muscle tissue and keeps your metabolism from slowing down, which can also aid in weight management.

Ezekiel bread may be good for gut health

Ezekiel bread is a good choice for people looking to get more fiber in their diet.

Studies suggest that high-fiber diets are essential for maintaining a healthy gut, according to research in the journal Genes.

“Eating fiber from plant foods like whole grains, beans, lentils, fruits, and veggies can lead to a greater variety of good gut bacteria, metabolites that benefit human health [aka good compounds that the gut bacteria make for us], and has been shown to lower the risk of some types of cancer,” Hultin says.

Additionally, fiber is needed to help you eliminate waste through the digestive system. If you suffer from constipation, a low-fiber diet may be to blame.

One slice of Ezekiel bread will provide you with 20 percent of a woman’s daily fiber requirement.

Some proponents claim the sprouting process can reduce the FODMAP content of Ezekiel bread. FODMAPs are short-chain carbohydrates that are difficult for some people to digest. (It stands for fermentable oligosaccharides, disaccharides, monosaccharides and polyols.)

If you’re following a low-FODMAP diet for irritable bowel syndrome (IBS), you may want to start with a small portion of Ezekiel bread to see how you do since people’s tolerance levels differ.

It contains no dairy, eggs, honey, or other ingredients that vegans avoid.

Hultin says she recommends Ezekiel bread to clients looking for a healthy bread option.  “I’d suggest it for breakfast or lunch to make sandwiches or toast.”

Just like whole wheat and other types of bread, Ezekiel bread is really versatile. And it boosts the nutritiousness of your bread-based recipes. Here are some tasty ways to try Ezekiel bread:

However, Ezekiel bread is not gluten free

Other people may also want to avoid Ezekiel bread. Since it contains wheat, anyone with a wheat allergy should steer clear.

Ready to take things to the next level? Here’s how you can make Ezekiel bread at home.

The post 6 Reasons People Get Excited About Ezekiel Bread Nutrition appeared first on The Healthy.

Previous articleHow Bad Is It to Wash Your Face in the Shower? Skin Care Experts Explain
Next article5 Reasons to Wear a Face Mask Other Than Covid-19
RELATED ARTICLES
Health

What to Know About Dry Eye Symptoms, Causes, and Treatments

This is Why You Should Avoid Grapefruit While on Certain Statins