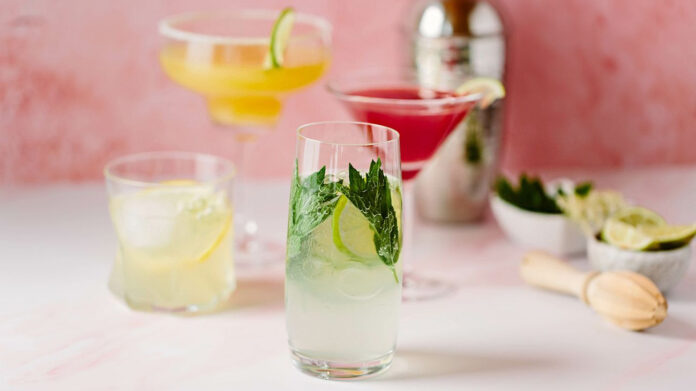 Forgoing booze altogether is ideal if losing weight is your health goal, but if you must imbibe, registered dietitians recommend opting for certain alcoholic beverages over others.

Alcohol consumption is on the rise, even though happy hour at bars and restaurants is on hold in many parts of the world. When COVID-19 stay-at-home orders went into effect back in March, during just one week, national alcohol sales increased 54 percent compared with the same week in 2019, and three out of every four adults began consuming alcohol one more day per month year over year, according to a letter published in September 2020 in the journal JAMA Network Open.

You may not think drinking more during the pandemic sounds bad — because having a glass of wine with dinner is good for your heart, right? But it’s not that good, according to some research. A meta-analysis published in August 2018 in The Lancet found that while alcohol has been shown to provide some protective factors for heart disease and diabetes among women, the positive effects were offset by the fact that alcohol can increase the risk of cancer, accidents, and communicable disease. It seems the answer to the question of whether drinking even in moderation is healthy varies depending on whom you ask.

Alcohol contains empty calories and doesn’t provide any nutrients for your body, according to the Cleveland Clinic. “Alcohol can not only cause a water weight increase, but it’s also full of calories, so your actual weight can go up, too,” says Amanda A. Kostro Miller, RD, a Chicago-based advisory board member for Fitter Living, a consumer website that offers fitness resources. “The other issue is that once people start drinking alcohol, they tend to lose track of their health and weight goals.” Maybe your plans to have only one drink turn into two or three or four drinks, or you find yourself reaching for unhealthy foods once the alcohol kicks in. According to a previous study, the more alcohol you consume, the more likely you are to make poor food choices.

So how can you fight back if you’re concerned about your weight but don’t want to abstain completely? Think of alcohol as a treat. “Choose dessert or alcohol for the night, not both,” Kostro Miller says.

The usual advice is to drink in moderation. Moderation is defined by the Centers for Disease Control and Prevention (CDC) as up to one drink a day for women and up to two drinks a day for men. That extra drink for men may be slashed soon, though. Experts behind the July 2020Scientific Report of the 2020 Dietary Guidelines Advisory Committee called for these guidelines to be changed this year to recommend no more than one drink per day for men. Time will tell whether the recommendation becomes an official guideline. But if you’re trying to lose weight, it’s a good idea to limit your drinking even more, because, as the aforementioned report states, drinking less is always healthier than drinking more.

You’ll want to ensure that your overall relationship with alcohol is healthy, too. The previously mentioned JAMA Open Network letter noted that excessive alcohol consumption can lead to or worsen mental health problems such as anxiety and depression, which may already be on the rise due to COVID-19. “Be sure you’re enjoying it and not just drinking out of habit or in order to forget about real problems that should be addressed in other ways,” says Kelly Jones, RD, a certified specialist in sports dietetics based in Philadelphia.

Here are the best and worst types of alcohol to drink if you’re watching your weight.

8 Best And Worst Types Of Alcohol For Weight Loss

Enjoying a glass of red wine with dinner has long been considered a “healthy” move because of its purported heart-healthy benefits. According to Harvard Health Publishing, the idea can be traced back to the 1980s. And though there’s never been a long-term randomized trial that proved some of these claims, a dry red wine (like a Cabernet Sauvignon or Syrah) is one of the lower-calorie adult beverages you can reach for, Zanini says. A 5-ounce (oz) glass of red wine has about 105 calories, according to the Cleveland Clinic.

If you’re in the mood for beer, go light. It’s another low-calorie option, Zanini says. You’ll save about 40 to 55 calories in a 12 oz serving compared with a regular beer, according to the Cleveland Clinic.

A 3 oz serving of dry vermouth contains 105 calories, according to MedlinePlus. And while you’ll generally find it mixed into a martini or a Manhattan, you can save calories by sipping it neat. The reasonable calorie count isn’t the only reason to reach for it. Some research has found dry vermouth contains significantly more polyphenols than white wine. Polyphenols are naturally occurring compounds in plants that have been shown to help regulate metabolism, weight, and chronic disease, according to a study published September 2018 in Frontiers in Nutrition. Keep in mind, however, that there haven’t been any peer-reviewed human studies on the health benefits of drinking dry vermouth, so it’s unclear whether this possible benefit outweighs the general risks of drinking alcohol.

Whether you’re into vodka or tequila, gin or whiskey, there’s no real difference in calories or carbohydrates — they all have about 100 calories in a 1.5-ounce serving, according to MedlinePlus. Your best bet when sipping alcohol is to have it straight, or with sparkling water or club soda, Zanini suggests. That’s because a whiskey drink, for example, can quickly go from a 100-calorie drink to 300 plus when you add sugary, high-calorie mixers.

You’ll save about 35 calories per serving by choosing bubbly over a sweet white wine, according to MedlinePlus. A 4 oz glass of Champagne has 85 calories. And while that might not sound like much, it’s also possible that you’ll feel fuller and turn down that second drink as a result of the carbonation. A small study published in the Tokyo-based Journal of Nutritional Science and Vitaminology found that women reported feeling more full after drinking sparkling water compared with flat.

Fancy mixed drinks might sound good, but they’re often loaded with calories. A Long Island Iced Tea, for example, will set you back about 500 calories in one 8 oz glass, according to the Cleveland Clinic. That’s more calories than you’ll find in a double cheeseburger from McDonald’s.

A 12-ounce craft beer runs about 170 calories (or more), according to MedlinePlus. The reason for this difference when compared with commercial beers is they often have extra ingredients and carbs that amp up their flavor. Additionally, these beers tend to have higher alcohol content than widely distributed store-bought beers, and more alcohol means more calories.

An Alternative to Booze for Anyone Looking to Lose Weight

Keep in mind: Mocktails are always an option. Going liquor-free is the ultimate way to cut back on alcohol calories. But you’ll still need to keep an eye on what’s going into the mocktails and choose a low-, or better yet, no-calorie water or sparkling water drink with lime, Kostro Miller suggests. If you do choose to drink alcohol on a given night, she says it’s a good idea to alternate between an alcoholic and nonalcoholic drink to keep your calorie intake in check. “This will spread out the calories from alcohol and keep you hydrated,” she says.

The Many Benefits of Oatmeal — And 7 Different Ways to...