Should You Try Chlorophyll? 4 Potential Benefits 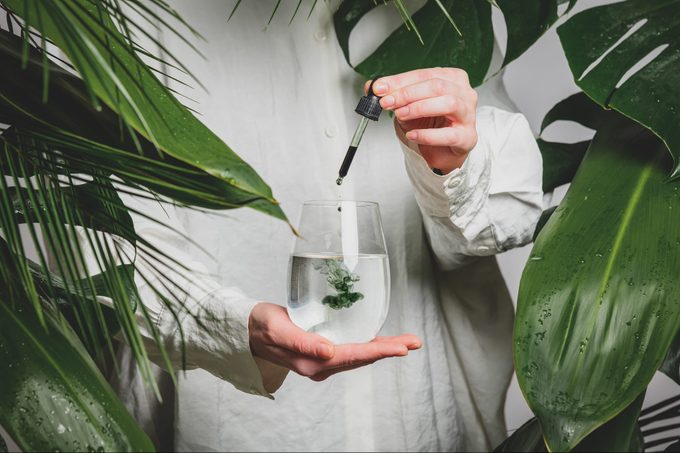 Is the chlorophyll trend all hype?

If something is too good to be true, you can count on the fact that it usually is. That saying especially goes for some of the health claims popularized on social media, like drinking celery juice for clear skin or taking certain supplements for weight loss. Always take what you see online with a grain of salt.

Which brings us to the latest Internet craze: Drinking liquid chlorophyll.

Influencers claim the supplement can clear skin, help with weight loss, and (as always) prevent cancer. While chlorophyll does offer some real benefits, the hype’s getting ahead of the truth, say experts.

One of the most common things people know about chlorophyll is that it gives plants their green color.

Chlorophyll also contains vitamins and antioxidants, too. And although you can get chlorophyll from plants, it’s possible to do so with supplements as well.

What about chlorophyll water?

Chlorophyll water is simply a mixture of liquid chlorophyll supplement and water, and it’s one of the most popular ways people are implementing chlorophyll in their diet on social media.

In general, green vegetables offer a wide range of health benefits, including a reduced risk of hypertension, cardiovascular disease, obesity, and cognitive decline, according to registered dietitian Malina Malkani.

Eating more vegetables with chlorophyll contributes to your overall vegetable intake, which is good for overall wellbeing and health.

Chlorophyll is available in all green plants including:

Note that some research in the Journal of Zhejiang University found that cooking chlorophyll-rich foods for a long time by microwaving, boiling, or stir-frying them lowers their chlorophyll levels.

So it may be best to eat them raw or use light cooking methods like steaming to get the most chlorophyll.

One of the reasons chlorophyll supplements are popular is that they’re concentrated and may be easier to absorb than chlorophyll from plant food.

Ointments and sprays containing chlorophyll exist for topical use, too.

What are the potential benefits of chlorophyll?

Whether or not chlorophyll is beneficial for your health is a loaded question—and the answer depends on a few factors.

First, there’s a difference between using chlorophyll topically and orally. Then there are the benefits of eating foods with chlorophyll to consider, too.

The bottom line is there’s not a lot of research on chlorophyll, and more is necessary to come to any surefire conclusions.

Here’s what preliminary research and experts can say about the potential benefits of chlorophyll.

According to Niket Sonpal, MD, a New York board-certified internist, research suggests that chlorophyll may have skin care benefits such as reducing inflammation, clearing acne, and decreasing wrinkles.

Note, however, that all of the following research for skin health is from rubbing it on your skin—not drinking it or taking supplements.

One 2018 pilot study in the Journal of Clinical and Aesthetic Dermatology tracked 24 women with mild-to-moderate acne for eight weeks; they used a twice-a-day topical treatment of cleanser, acne cream with 2 percent salicylic acid, and a rebalancing gel with a version of chlorophyll called sodium copper chlorophyllin complex.

The researchers found that this regimen improved pore size, skin smoothness, clarity, skin tone, and acne lesions. Although, it’s unclear how much of this is due to the chlorophyll versus the salicylic acid.

A very small study from 2016 published in the journal Clinical, Cosmetic and Investigational Dermatology looked at the effects of topical chlorophyll (sodium copper chlorophyllin complex again) compared to a topical form of vitamin A known as tretinoin. The four women found that both treatments had a similar effect on repairing skin damage.

Two other trials from 2015 found that topical gel containing chlorophyllin complex salts could improve signs of sun damage and age spots, ease acne, and is well tolerated by patients.

The upshot is that topical chlorophyll seems to help people with acne and some signs of aging.

Chlorophyll may improve the quality of red blood cells, leading some people to believe it’s a “blood builder”—it can help construct blood cells.

According to research in the journal Indian Pediatrics, chlorophyll and hemoglobin share a similar atom structure. Hemoglobin is crucial to transporting oxygen to your body organs; when you fall low, your energy can dip.

There is some suggestion that chlorophyll behaves similarly to hemoglobin even though it contains magnesium while hemoglobin is made with iron: In the same Indian Pediatrics pilot study, researchers looked at wheatgrass juice and blood transfusion patients. (Wheatgrass is about 70 percent chlorophyll.)

They found that patients who drank wheatgrass required roughly half as many blood transfusions. The researchers say they aren’t certain whether the benefits were from wheatgrass itself or the chlorophyll content.

Another study on 42 people on dialysis published in the Journal of Biological Regulators and Homeostatic Agents looked at the effects of an iron-and-chlorophyll treatment.

Researchers found that the combo improved quality of life and relieved some anemia-related symptoms.

Weight loss may be another area to look into, considering some research published in the journal Appetite.

A 2014 study in the journal on 38 overweight women on a weight loss plan found that those who took a daily green plant membrane supplement containing chlorophyll saw greater weight loss than a group that didn’t take the supplement.

But the difference wasn’t earth-shattering: The researchers found that, on average, the women taking the supplement lost three additional pounds over three months.

Earlier research (2013) assessed a supplement of chlorophyll-containing membranes, checking its effect on hunger, fullness, and ghrelin (a hunger hormone) in overweight women.

They found that the supplement helped suppress hunger and might help prevent overeating.

Researchers looked at seven people with this condition and the effects of dietary charcoal and copper chlorophyllin intake. They found that the chlorophyllin supplement decreased the number of TMAs, and this effect lasted longer than the charcoal.

While you’ll hear about chlorophyll’s effect on digestion, inflammation, hormone balance, arthritis relief, fibromyalgia, and cancer, the research isn’t quite there, yet. Most of the studies are on animals, and those findings don’t always translate to humans.

Dr. Sonpal adds that some research suggests chlorophyll may help fight certain kinds of cancers, and help aid digestion by increasing the beneficial bacteria in the digestive tract.

Safety, risks, and side effects

Dr. Sonpal says that the natural chlorophyll you get from food is not dangerous and has no known side effects.

Malkani adds that when people take chlorophyll supplements in amounts similar to what they’d get from food, there doesn’t seem to be any risk.

But if you take higher amounts in supplements, says Dr. Sonpal, you may risk diarrhea, vomiting, and increased susceptibility to getting a rash from the sun.

“Liquid chlorophyll is not advised for pregnant and/or breastfeeding women due to a lack of research concluding that it is safe for this population,” she says.

“As always, it’s important for consumers to check first with their doctor or registered dietitian before starting any new supplements, liquid chlorophyll included.”

Another reason to check with your doctor or pharmacist before supplementing is that they may interact with other medications you take.

So are chlorophyll water and supplements worth the expense?

Now that you know what the research says and doesn’t say, you might wonder whether or not chlorophyll water or supplements are worth trying, according to experts.

Dr. Sonpal says he’s hesitant to say that chlorophyll is the be-all and end-all remedy for helping weight loss, clearing skin, or reducing cancer risk because there is such limited research on chlorophyll. However, that’s not to say that certain people do not benefit from it.

“There has been little research to prove that drinking chlorophyll has any health benefits,” he says. Although, applying it topically may help reduce acne and swelling.

“As a registered dietitian and mother of three girls, I’m glad this latest social media trend is mostly harmless, but I wouldn’t recommend it,” Malkani adds.

Instead of drinking liquid chlorophyll, Malkani would much rather see people put their time, energy, and resources toward eating more green vegetables.

“Green vegetables offer chlorophyll, but they also offer health benefits supported by a robust body of scientific evidence and are significantly cheaper and more filling thanks to their fiber content,” she says.

So although topical chlorophyll for skin care looks promising, swallowing oral chlorophyll supplements doesn’t really make sense based on the science so far.

Spend your money on green vegetables instead—you’ll get save a lot and get plenty of additional nutrients as well.

If you do give this trend a try, consult your doctor, pharmacist, or dietitian. And remember to look for “chlorophyllin” on the label.

The post Should You Try Chlorophyll? 4 Potential Benefits appeared first on The Healthy.

Previous articleWhat is Oxidative Stress and Should You Worry About It?
Next articleWhat Is Filtered Water and Is It Healthier Than Tap?
RELATED ARTICLES
Health

Is Weight Loss Medication Safe For Women Over 50?

4 Skin Conditions That Can Signal Other Health Problems

3 AM and Wide Awake? Here’s How to Sleep Through the...