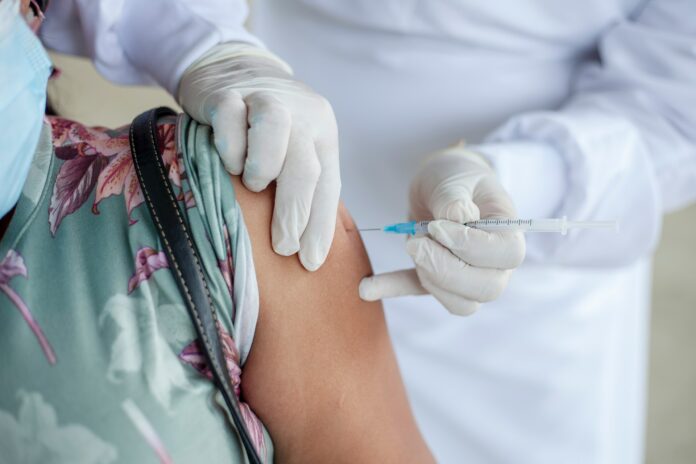 People in the United States fully vaccinated with an mRNA COVID-19 vaccine will be eligible for a booster dose 8 months after their second dose, federal health officials announced August 18.

This comes as the Delta variant of the coronavirus is driving a surge in cases and hospitalizations in the United States, the vast majority in unvaccinated or partially vaccinated people.

“The available data make very clear that protection against SARS-CoV-2 infection begins to decrease over time following the initial doses of vaccination, and in association with the dominance of the delta variant, we are starting to see evidence of reduced protection against mild and moderate disease,” according to a statement signed by CDC Director Dr. Rochelle Walensky, acting FDA Commissioner Dr. Janet Woodcock, White House chief medical adviser Dr. Anthony Fauci, and other U.S. health leaders.

“Based on our latest assessment, the current protection against severe disease, hospitalization, and death could diminish in the months ahead, especially among those who are at higher risk or were vaccinated during the earlier phases of the vaccination rollout,” the statement says.

Booster doses will be available as early as the week of Sept. 20.

While health officials said they expect people who received the one-dose Johnson & Johnson vaccine to need an additional dose, they are waiting for the company’s two-dose clinical trial results.

Details of the plan were released during a White House COVID-19 press briefing on August 18.

Higher-risk populations will be first in line for a booster. This includes residents of long-term-care facilities, healthcare workers, and other frontline workers.

After that, boosters would be made available similar to the initial rollout, with older people likely vaccinated sooner.

Certain immunocompromised people are already eligible for a third dose now that the Food and Drug Administration (FDA) modifiedTrusted Source the emergency use authorizations (EUA) last week for the mRNA vaccines.

This is not considered a “booster” for this group but an “additional dose” because many people with weakened immune systems don’t generate a robust immune response from the standard regimen.

The Biden administration’s new policy hinges on an independent review of the safety and efficacy of boosters by the FDA and the vaccine advisory committee of the Centers for Disease Control and Prevention.

Even as federal officials move forward with its booster plan for people in the United States, some experts caution that data on the need for boosters at this time is limited.

They add that more effort should also be made to reach the unvaccinated, both in the United States and worldwide.

Limited data on need for boosters

Dr. Richard Greenberg, an infectious disease physician at the University of Kentucky, said there hasn’t been enough peer-reviewed data to support a wide rollout of boosters to people in the United States.

He is the lead investigator for the Kentucky site of a clinical trial to assess varying doses of a J&J booster shot. Studies like this will provide data for making decisions about when boosters are needed.

Earlier this week, Pfizer and BioNTech announced that they submitted early stage clinical trial data to the FDA looking at the benefits of a booster for their vaccine.

The study found that an additional dose generated “significantly higher neutralizing antibodies” against the coronavirus’s original strain and the Beta and Delta variants, reports CNBC.

The study doesn’t show whether people need a higher level of antibodies to fend off severe COVID-19 or if the level they have 8 months or more after full vaccination is enough.

This study “shows an antibody boost with an additional dose, but I didn’t see data to say that it correlates to anything clinical,” said Greenberg.

Some of the Biden administration’s concerns stem from recent Israel government data showing a decline in the protection offered by the Pfizer-BioNTech vaccine, reports The New York Times.

The data suggests a continued decrease in the vaccine’s effectiveness against mild or symptomatic infection overall and severe disease among older adults.

In people 65 years old or older who received their second dose in January, vaccine effectiveness against severe COVID-19 had dropped to 55 percent, according to the Israel data.

However, the Times reports that some experts pointed out that the data has a wide margin of error. Others said more information is needed — including from the United States — to know how well the vaccines work.

But this data shows that the vaccine was only 39 percent effective against infection and symptomatic illness.

This contrasts with a U.K. study published in July in The New England Journal of Medicine, which found that a two-dose regimen of the Pfizer-BioNTech vaccine was 88 percent effective against symptomatic infection caused by Delta.

Some U.S. data suggests that the mRNA vaccines continue to protect against severe COVID-19, even with Delta circulating.

One study released August 18 by the CDC found no decline in the vaccines’ effectiveness against COVID-19 hospitalization over 24 weeks.

Another CDC study found that among nursing home residents, vaccine effectiveness dropped from 75 percent March-May 2021 to 53 percent in June-July.

No data is available yet on vaccine effectiveness against severe disease for this older population.

In the United States, there are hints at a rise in breakthrough infections in fully vaccinated people in certain states.

It’s not clear if this trend applies to all states. Or if it’s due to a waning of immunity in the months after vaccination or the higher transmissibility of the Delta variant.

The vaccines, though, were never expected to block all infections. Instead, they were designed to reduce severe illness.

“We don’t want people getting sick and being put in the hospital,” said Greenberg. “That’s what the vaccines are there for — to protect people from severe illness, from dying, and from terrible morbidity.”

The vaccines are still effective for this, even against the Delta variant.

The number of breakthrough cases that have led to hospitalization or death is small. As of August 9, just over 8,000 of these have been reportedTrusted Source to the CDC.

In addition, the vast majority of severe COVID-19 cases and deaths in the United States are among the unvaccinated or partially vaccinated.

The single-dose J&J vaccine has also proven effective against severe illness, including that caused by Delta.

In a recent press release, South African researchers reported that although there were many breakthrough infections, the vaccine was 65 to 66 percent effective against hospitalization due to COVID-19.

The protection against death was even higher — 91 to 95 percent.

However, this study wasn’t designed to see if people vaccinated earlier in the year had the same protection as people who received their doses more recently.

Some experts say that given the limited data on the need for boosters right now, the United States would be better off vaccinating the unvaccinated.

These people are more likely to end up in the hospital or die from COVID-19. And even if they aren’t at high risk personally, if infected, they can easily spread the virus to someone who is.

Around 30 percent of eligible Americans have not received even one dose, CDC data shows. On top of this, children under 12 years are not yet eligible for the vaccines.

Increasing vaccination rates in a community also reduces the risk of infection for everyone.

“Get a booster if you have a very compromised immune system, are a transplant patient, or are very elderly,” Ellie Murray, ScD, an epidemiologist at Boston University School of Public Health, wrote this week on Twitter.

“Otherwise, you reduce your risk way more by convincing your neighbors to get their first & second doses [of an mRNA vaccine] or a single-dose J&J.”

Earlier this month, the World Health Organization (WHO) called on wealthy countries to stop distributing booster doses to give the world a chance to vaccinate at least 10 percent of the population in all countries by the end of September.

“I’m a little worried that there are so many people in the world who need vaccines,” said Greenberg. “Do we have enough [capacity] to jump to this new strategy without taking into account what’s happening around us?”

Should You Double Mask? Plus 7 More Ways to Thwart the...

Parosmia: The Covid-19 Side Effect That Distorts Your Sense of Smell

Covid-19 Vaccinations: Should You Reschedule Your Mammogram?

New COVID-19 Mu Variant Named a ‘Variant of Interest’—Here’s What to...