Why You Need Whooping Cough Vaccines and When to Get Them 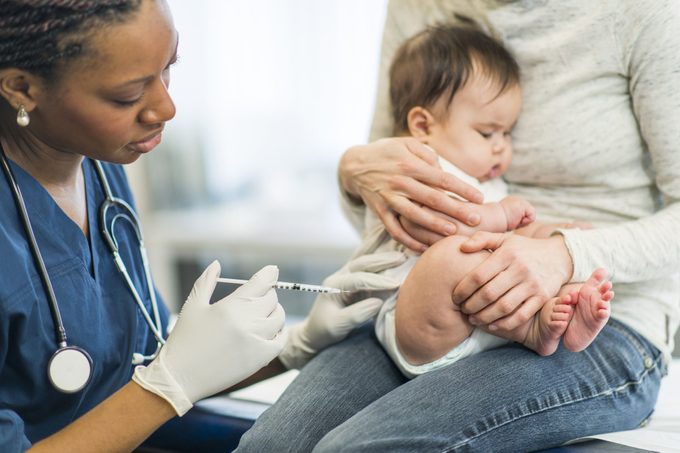 Getting the whooping cough vaccine

Pertussis, also known as whooping cough, is one of the most contagious infections known to humankind. It used to be a major cause of sickness and death, especially in young infants. But that was before the whooping cough vaccine.

The pertussis vaccine is 80 to 85 percent effective against the illness, and when it was introduced, it slashed the number of infections.

“This disease is not without consequences,” says Tina Q. Tan, MD, a spokesperson for the American Academy of Pediatrics.

Although infants and babies assume the burden of these consequences, adolescents and adults can miss up to a month of work or school if they have severe complications, she says.

Here’s what you need to know about the life-saving whooping cough vaccine.

Pertussis is caused by a small, rod-shaped bacterium called Bordetella pertussis, which jumps from person to person through respiratory droplets.

It’s so infectious that if 10 people are exposed to one sick person, eight of them will fall ill.

Once these pathogens penetrate your defenses, they eject a toxin that paralyzes the protective cilia (small, hairlike extensions) in your respiratory system.

Your airways become inflamed, you can’t expel mucous and other secretions, and you develop symptoms that can last for months, hence the label “100-day cough.”

“Pertussis causes a prolonged cough illness in people of all ages,” explains Dr. Tan, who is also an infectious disease physician and professor of pediatrics at Northwestern University Feinberg School of Medicine in Chicago.

Pertussis gets its nickname, whooping cough, from the distinctive sounds patients make trying to catch their breath after the fits.

The coughs can be so severe that people vomit after them. They’ve also been known to crack ribs and cause hernias.

A quarter to a third of children under the age of six months who get whooping cough end up with complications like pneumonia, apnea (a pause in breathing), seizures, and even death, says Richelle Schiro, MD, a family medicine physician and chair of the Vaccine Committee at Ochsner Health.

Before the first whooping cough vaccine became widely available in the 1940s, the Centers for Disease Control and Prevention (CDC) reported about 200,000 cases annually.

The actual incidence was probably higher, says Dr. Tan. After the vaccine, cases steadily declined, hitting an all-time low of just 1,010 cases in 1976.

But then rates started rising again.

“We became a victim of our own success,” says Dr. Schiro. “People didn’t see how scary the disease was and became more concerned about the side effects.”

In 2012, the CDC reported almost 50,000 cases of pertussis, with 13 deaths in children. This is likely an undercount.

A newer vaccine has fewer side effects

The original pertussis vaccine contained an inactivated version of the entire Bordetella pertussis bacterium to prompt an immune response.

It was effective but also had some side effects,: a high fever, sudden limpness in babies, and inconsolable crying.

“Babies would cry for four to six hours without stopping,” says Dr. Tan. Some even had seizures.

After that, says Dr. Schiro, “research turned toward how[to] make this vaccine better tolerated with fewer side effects.”

The current acellular version came out in 1996. It uses only inactivated toxins from the bacterium.

As a result, “the side effects are pretty minimal,” says Dr. Tan. “We don’t see too much fever and definitely don’t have crying.”

The downside is that the immunity doesn’t last as long, necessitating boosters in older kids and adults.

This is the only pertussis vaccine used in the United States, although some other countries do still use the whole-cell vaccine.

Both of the acellular pertussis vaccines used today are combined with vaccines for tetanus and diphtheria. The difference lies in who gets which and in the strength of the components.

Children under the age of 7 get the DTaP vaccine. This stands for diphtheria, tetanus, acellular pertussis. Those 7 years and older get Tdap, which also treats tetanus, diphtheria, and pertussis.

“The DTaP has a higher concentration of diphtheria and tetanus because they are given to children who are just starting to develop immunity,” explains Dr. Tan. “The Tdap vaccines have lesser levels, primarily because adolescents and adults have already received pertussis vaccines in the past.”

Not surprisingly, the Tdap vaccine has fewer side effects than the DTaP vaccine.

Different companies manufacture different versions of the vaccines, but they are all effective, Dr. Schiro says.

Children, adults, and people who are pregnant should get the vaccine

The CDC recommends that children, adults, and especially pregnant people get the pertussis vaccine.

In children, DTaP is given in five doses. Children get the whooping cough shot when they reach the following ages:

Older kids get a booster between when they reach age 11 or 12, says Dr. Schiro.

“After that, we recommend that people get them every 10 years,” she says.

Yes, that means you should be getting booster shots as an adult. Adults, caregivers, and older siblings often infect babies without even knowing they have pertussis—just another reason parents need to be up to date on immunizations.

The exception is people who are pregnant, who should get one each time they’re pregnant, ideally at 27 to 36 weeks.

Experts recommend that most people get the whooping cough shot, but the CDC suggests speaking with your doctor if you or your child has a severe allergy, a nervous system problem, seizures, or Guillian-Barré syndrome (a rare disorder where the body attacks the nerves), or if you’ve had a bad reaction to another vaccine.

The vaccines are safe

The side effects associated with the different pertussis vaccines aren’t serious and usually go away quickly. And, no, getting a whooping cough vaccine won’t give your child autism.

Pertussis itself, on the other hand, is serious and does not go away quickly. To prevent long-term illness or danger—and to stop the spread of this highly contagious infection—it’s important to get vaccinated.

The post Why You Need Whooping Cough Vaccines and When to Get Them appeared first on The Healthy.

Previous articleCorn vs. Flour Tortilla: Which One Is Healthier?
Next articleWhat to Know About Dry Eye Symptoms, Causes, and Treatments
RELATED ARTICLES
Health

Here’s What You Need to Know About Psoriasis Symptoms, Causes, and...

How to Tell if You Have Arthritis in Your Neck

Got a Tight Neck? Here’s How to Do a Levator Scapulae...

Hair Loss and How to Avoid it