This is Why You Should Avoid Grapefruit While on Certain Statins 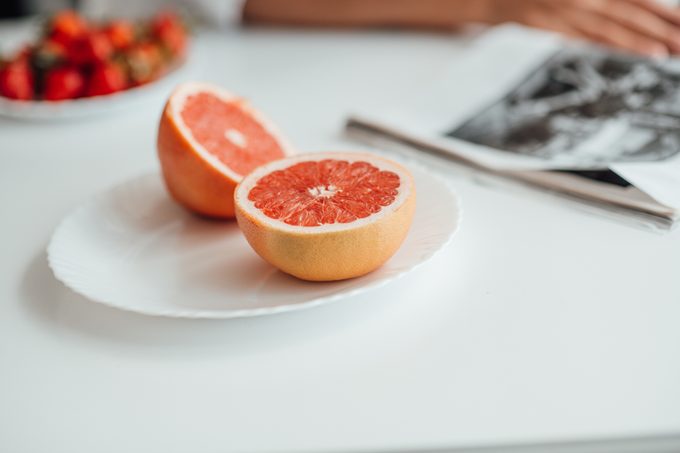 Fruits and vegetables are part of a heart-healthy diet, but grapefruit might be off the table for some people who take cholesterol-lowering drugs called statins.

If you’re one of the more than 39 million people in the United States taking statins, it’s important to know that there are generally relatively few statin side effects.

However, eating grapefruit (or drinking grapefruit juice) while on certain statin medications may increase the risk of some issues.

And that brings up lots of other questions, like whether or not you need to avoid grapefruit altogether while taking these medications. Here’s what doctors need you to know about grapefruit and statins.

How do statins work to help lower cholesterol?

Statins reduce the LDL cholesterol that builds up in the arteries. (That’s the bad stuff.)

The drugs also allow for or enhance the removal of this type of cholesterol from the bloodstream, says Robert Eckel, MD, past president of the American Heart Association and an endocrinologist at the University of Colorado School of Medicine.

Basically, they work steadily and reliably to help regulate LDL levels—even if you come up short on exercise or indulge in a slice of cheesecake once too often, according to Satjit Bhusri, MD, a cardiovascular disease specialist and founder of Upper East Side Cardiology.

The buildup of this type of cholesterol in the arteries eventually blocks blood vessels and increases the risk of heart attacks, stroke, and death.

Although lifestyle changes like losing weight, exercising, and eating a heart-healthy diet can help lower cholesterol, some people benefit from an added statin.

There are many different statins, including:

How and why does grapefruit interact with statins?

Grapefruit is a good source of antioxidants, vitamin C, and potassium, but it’s also high in furanocoumarins. These organic chemical compounds are in many plants, according to the Journal of Clinical Pharmacology.

And they may interfere with the body’s ability to break down certain medications, like some statins.

The furanocoumarins in grapefruit essentially stop the enzyme CYP3A4 , which is found mainly in the liver and intestine, from metabolizing statins. The enzyme typically reduces the amount of the drug that enters the bloodstream.

Because grapefruit juice stops the enzyme from doing its job, too much of the drug enters your blood—and stays there for longer.

“As a result, more of the drug absorbs, making it more powerful than it’s meant to be, even toxic in some cases,” Dr. Bhusri says. With higher levels of consumption of these juices, statin levels increase and may result in side effects.

Robert Greenfield, MD, a cardiologist and lipidologist at MemorialCare Heart & Vascular Institute at Orange Coast Medical Center in Fountain Valley, California, says there is a 50 percent reduction in the enzyme CYP3A4 in the intestine within four hours of drinking a serving of grapefruit juice, or the equivalent of a whole grapefruit’s worth of juice.

Does grapefruit interact with all statins?

The short answer is no. Grapefruit only interacts with some statins.

The fruit most affects lipophilic statins, which tend to penetrate tissues in the body to a greater extent, says Dr. Eckel.

He names the following statins as those affected by grapefruit:

These statins depend on that CYP3A4 enzyme, Dr. Greenfield says. But not all statins use this enzyme for breakdown.

“Other statins, such as pravastatin, rosuvastatin, fluvastatin, and pitavastatin, are not dependent on the CYP3A4 for breakdown but [use] a different enzyme, called CYP2C9, which has nothing to do with grapefruit,” he says.

If you’re taking one of those statins, there is no reason to avoid grapefruit for fear of interaction.

What are the risks and side effects of mixing grapefruit and statins?

As with any medication, taking the correct dose of statins is important. High dosages correlate with increased side effects, according to Dr. Bhusri.

“When statin takers eat large amounts of grapefruit, the level of statins in their blood can increase, raising the possibility of side effects,” he says. “Problems can occur for those who are sensitive to statin medications or those who have kidney disease or other illnesses.”

Side effects from a grapefruit-statin interaction are typically mild, such as an increase in muscle or joint pain. Severe side effects are rare and include muscle fiber breakdown and kidney failure, according to Dr. Bhusri. If you experience aches, cramps, and/or weakness, notify your doctor, Dr. Eckel says.

You know grapefruit can interact with some statins. But that’s not all. The furanocoumarins in grapefruit may affect how the body processes other medications, such as allergy medicine, according to the Food and Drug Administration.

And other citrus fruit may also interact with statins.

“I have read that Seville oranges have a grapefruit-like effect, so we should assume there is an interaction similar to grapefruit juice,” Dr. Greenfield says.

Tangelos, pomelos, and bitter oranges might also interact with statins, but more research is necessary.

So, do you really need to cut out grapefruit?

For peace of mind, grapefruit lovers who take statins that are known to interact with the fruit may want to switch to another medication or avoid the fruit.

It’s difficult to know how much grapefruit it takes to have an interaction with certain statins, but Dr. Bhusri and Dr. Eckel say it’s probably OK to enjoy a small glass of juice if you can’t switch medications.

“That’s because the studies showing dangerous effects used massive amounts of furanocoumarins, the amount found in a quart or more of the juice,” Dr. Bhusri says. “What’s more, eating half a grapefruit is even less risky than drinking grapefruit juice since it takes several fruits to make a single glass of juice.”

Dr. Greenfield says that although there is a well-defined interaction between grapefruit juice and certain statins, this interaction actually results in a further reduction of “bad” LDL cholesterol.

So he doesn’t advise people on statins to avoid grapefruit juice.

And if you take pravastatin, rosuvastatin, fluvastatin, or pitavastatin, which don’t interact with the fruit, feel free to drink or eat your grapefruit as you please.

As always, to be on the safe side, check with your doctor to be sure it’s OK to have grapefruit with your stain.

The post This is Why You Should Avoid Grapefruit While on Certain Statins appeared first on The Healthy.

What Is Mindful Eating And Should You Do It?

8 Best Eye Creams for Dark Circles, According to Dermatologists

7 Phases for The Perfect Skincare Regimen

How to Tell if You Have Arthritis in Your Neck

The Best Blankets, Bed Sheets and Pillows for a Cool Sleep