This Frozen Honey Trend Is Going Viral on TikTok—But Is It OK to Try It? 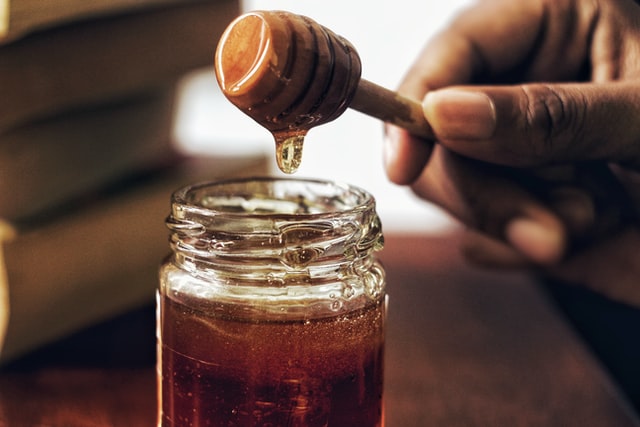 What to know before you freeze a bottle for dessert.

TikTok has become the source for new recipe ideas and snacks, but there are some floating out there that are kind of questionable. Case in point: frozen honey.

This DIY snack hack, which involves freezing honey in a plastic water bottle, is showing up all over the place, with people insisting it’s a (literally) cool way to enjoy honey.

The first person to post about this trick was @daveyrz, who plunked a small frozen water bottle of honey in a bowl outside and said, “let’s see if we can attract some bees.” After declaring that the bottle “looks way too frozen,” he banged it on a table, and then began squeezing thick frozen honey out. Once a big glob surfaced, he took a huge bite.

The idea took off, and plenty of other people have shared videos of their own frozen honey snacks. Fellow TikTokker @glossybearss is one of them, breaking down how they made the treat (FYI: it’s just pouring honey into a bottle and freezing it). The verdict: “I recommend but it’s really sweet.”

“What’s the point of this? Genuinely asking,” one person wrote in the comments. Others had questions about how long you should freeze the honey for, while one person shared this: “I just tried it and my tooth got stuck in it.”

So what’s the deal with this new frozen honey snack? Can this wreck your teeth? Is it even healthy? Experts have some thoughts.

Is it safe to eat this frozen honey snack?

Let’s talk about the frozen honey snack’s impact on your teeth, for starters. “Any time you harden something, you run the risk of breaking your teeth,” Mark Wolff, DDS, PhD, dean of the University of Pennsylvania School of Dental Medicine, tells Health. Honey doesn’t actually freeze, he points out, but it does harden and that thick, gummy substance can be “brutal” on your teeth.

But, despite the fact that this is pure sugar people are noshing on, Wolff isn’t overly concerned about the possibility of tooth decay. “There are some components inside honey that may actually reduce tooth decay—it does not cause as much of a change in the pH as far as dissolving teeth,” Wolff says. That doesn’t mean it can’t impact your teeth, “it’s just not as aggressive” as something like table sugar, he says.

As for the rest of your body, it’s also not a great option in large quantities. “While honey is a more natural alternative to sugar, it’s still essentially pure carbohydrates and will still spike blood sugar if consumed on its own or in large quantities,” Jessica Cording, RD, author of The Little Book of Game Changers, tells Health. “When your blood sugar is unstable, in the short term, you may experience mood swings, energy crashes, and poor appetite control.” Basically, eating an entire bottle of honey can make you feel pretty terrible afterward.

It’d be remiss of us not to at least mention calorie content, too. Of course, it’s important to listen to your body and eat what you want to eat, but keep in mind: If one tablespoon of honey contains about 64 calories (per the U.S. Department of Agriculture), an entire bottle (or frozen water bottle) of the sticky stuff is much, much more. “If you were to eat a frozen tablespoon—a single serving—of honey, no big deal, enjoy the sweetness,” Gans says. “But if you’re eating frozen bottles of it, even a small one, you would be consuming a whole lot of added sugar and calories for a simple refreshing snack.”

This snack also won’t keep you satisfied for very long, Cording says, so you’ll feel hungry not long after eating a massive amount of sugar. “From a health standpoint, it’s best used as an ingredient or a garnish as part of a meal or snack that provides a combination or protein, fat, and fiber,” Cording says.

And, if you regularly snack on frozen honey and other sugary treats, you could actually mess with your overall health. “Chronic glycemic instability has been associated with numerous adverse health outcomes such as diabetes, cardiovascular issues, weight gain, and impaired cognitive function, just to name a few,” Cording says.

If you still want to try this, go ahead—but try to keep serving size in mind (so, maybe don’t go ahead and eat an entire bottle of frozen honey). Instead, try out the treat in a much smaller serving size. “Put honey in an ice cube tray and then enjoy one cube,” Gans suggests. If you really want to go the bottle route, Cording recommends squeezing out a dollop onto a protein-rich food like Greek yogurt.

The Many Benefits of Oatmeal — And 7 Different Ways to...