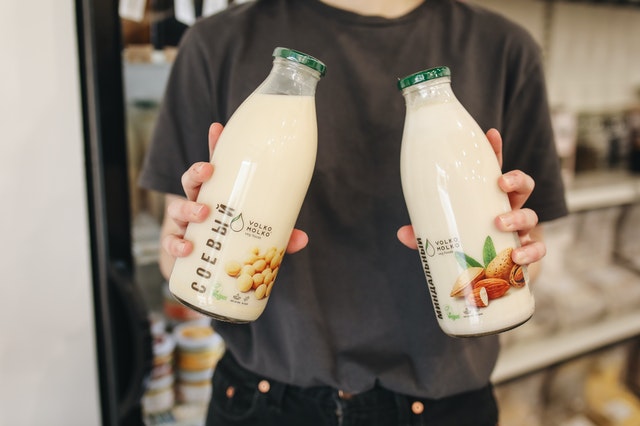 Plant-based milks are here to stay

Nowadays, you have a veritable buffet of milk options for that morning bowl of cereal or cup of coffee. Sure, there’s cow’s milk.

And for good reason.

People often choose these milks when following a plant-based diet or when they have a lactose intolerance or dairy allergy. Plus, the milks tend to have a lower carbohydrate count than dairy milk, making them good options for anyone following a lower-carb diet.

Some people just prefer these milk alternatives because of their taste.

According to Research and Markets, a global marketing research firm, the plant-based milk market is expected to be a $21.5 billion industry in the United States by 2024.

So let’s take a closer look at two of the most popular plant-based milks out there: soy milk and almond milk. Here’s what you need to know about their nutrition, benefits, and which one nutrition experts prefer.

What is almond milk, and how is it made?

Nope, you can’t actually milk an almond. (Or soy beans, for that matter.) The term “almond milk” has more to do with the liquid’s consistency and appearance than how it’s made.

The drink is made from almonds and water. To make almond milk, blend the ingredients together and strain the mixture to remove the almond pieces. The milk has a nutty taste and a light, creamy texture.

“Almond milk is a great low-calorie dairy alternative that’s a great source of vitamin E,” says Kelsey Lorencz, a registered dietitian nutritionist in Saginaw, Michigan, and owner of Graciously Nourished. “You’ll find it often fortified with calcium, vitamin D, and B vitamins such as riboflavin to help improve the nutritional value.”

What is soy milk and how is it made?

“Soy milk is a fantastic alternative to dairy, especially when you’re looking for a protein equivalent,” says Lorencz. “Most soy milk is fortified with calcium, vitamin A, vitamin B12, and Vitamin D.”

Like almond milk, it takes its name from its milky consistency and appearance.

Soy milk is typically made by soaking soybeans in water overnight, then grinding the beans with water, according to the Encyclopedia of Food Sciences and Nutrition. It has a slightly sweet taste and a creamy texture.

How are almond and soy milks used?

You can do pretty much anything with almond or soy milk that you would do with cow’s milk. Add it to smoothies, use it in overnight oats, make a latte, or eat a bowl of cereal.

Here are the nutrition facts and percentages of daily values (DV), for for 1 cup of shelf-stable, unsweetened soy milk:

Here are the nutrition facts—including the percent of daily value—for 1 cup of shelf-stable, unsweetened almond milk:

When unsweetened, they are low in sugar and contain fewer carbs than cow’s milk, making them good options for people with diabetes.

While they’re both solid alternatives to cow’s milk, they each offer specific health benefits.

One major perk of soy milk? Its protein content.

Soy milk is good for your ticker

This plant-based milk may help your heart health.

She adds that soy has heart-healthy antioxidant effects and estrogen-like effects that positively impact blood vessels too.

Almond milk is low in calories

Though it contains less protein than soy milk (and isn’t a source of complete protein), this milk has fewer calories than soy milk.

“It may be better for someone who needs to watch calories closely,” Andrews says.

Almost milk is good for your bones

Parents give kids cow’s milk to keep their bones strong, a benefit that comes from the high calcium content.

“[Almond milk] is higher in calcium than regular and soy milks due to fortification,” says Andrews.

Like almonds, almond milk is rich in vitamin E. “This is a potent antioxidant that is heart healthy,” says Routhenstein.

There are a couple drawbacks of each milk product to be aware of, but first let’s clear up a common misconception about soy milk: it’s doesn’t raise cancer risk.

In the past, people were concerned about the phytoestrogens in soy milk.

“These can act as estrogen or anti-estrogen in the body,” says Lorencz. “They are known as an endocrine disruptor and can upset our natural body hormone balance. This is not a concern for most people, and the health benefits outweigh any potential negative effects.”

Soy milk’s effect on the thyroid

If you have poor thyroid function or are taking levothyroxine (Synthroid) for hypothyroidism, limit your soy milk intake, advises Routhenstein.

Soy milk is a goitrogenic food, she says, meaning it can inhibit thyroid function.

Some people are allergic to soy and obviously shouldn’t drink soy milk. That said, such allergies aren’t very common.

A 2020 survey in Nutrition Today found that the prevalence of soybean allergies is lower than that of the other top allergens (those are milk, eggs, fish, crustacean shellfish, tree nuts, peanuts, and wheat.

Almond milk is low in protein

For instance, one unsweetened almond milk brand has 100 calories per cup and contains 4 grams of protein and 1 gram of fiber. These amounts are higher than the average cup of almond milk.

Is one or the other better for the environment?

Many people choose to follow a plant-based diet for the environmental benefits. But choosing a more environmentally friendly product is tricky.

“Both almond milk and soy milk have a better environmental impact than cow’s milk, but both come with some drawbacks,” says Routhenstein. “For instance, almond milk uses one of the lowest gas emissions; however, it uses the most water.”

Indeed, it takes almost four times the amount of water to grow almonds versus soybeans, according to a report from the UNESCO-IHE Institute for Water Education.

“It uses roughly half of what’s needed for cow’s milk but much more than what is needed for soy milk,” Andrews says.

“Soy milk uses less water,” says Routhenstein. “However, due to its mass production, it has destroyed many forests for land.”

Advice for any kind of plant-based milk

And look for milks without certain additives when possible. This includes carrageenan, a controversial ingredient found in some almond milks that some experts say is harmful.

Soy milk vs. almond milk: Which milk is better?

Either soy or almond milk can be a great choice for anyone following a plant-based diet or who is lactose intolerant.

The post Soy MiIk vs. Almond Milk: How Does Their Nutrition Compare? appeared first on The Healthy.

Previous article12 Foods to Limit or Avoid in a Type 2 Diabetes Diet
Next articlePinched Nerve in Your Neck? Here are the Symptoms and Treatments
RELATED ARTICLES
Food

Start Your Day Right: 8 Healthy Breakfast Ideas to Lower Your...

6 Benefits of Not Eating Meat (or at Least Less of...