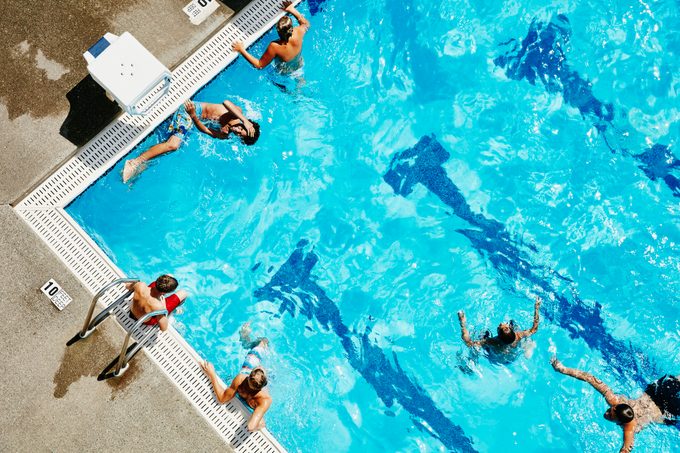 Is it OK to pee in the pool?

Taking a dip in a pool is a refreshing treat. That is, until the following question inevitably comes to mind: how many people have peed here?

No matter how hard you try not to think about it, it’s tough not to wonder whether you’re swimming in strangers’ urine. And maybe a part of you questions (for a friend, of course) how bad peeing in the pool really is.

One 2019 survey from the Water Quality and Health Council found that 40 percent of Americans surveyed admitted to peeing in the pool as an adult.

The same survey found that 51 percent of those surveyed reported using a swimming pool as a communal bathtub, either swimming as a substitute for showering or using the pool to rinse off after exercise or yard work.

No matter whether you admit to peeing in pools or are staunchly opposed to the idea, the question remains: is peeing in the pool risky or just gross?

Here’s what you need to know.

Quick reminder: pee, or urine, is the liquid waste of your body. This waste is a combination of things that the bloodstream can’t reabsorb. It contains a mix of water, salt, electrolytes, and chemicals called urea and uric acid.

“The kidneys filter urea, ammonia, and bile from the liver and form it into urine, which is then excreted through the urethra,” says Niket Sonpal, MD, a board-certified internist and gastroenterologist in New York City.

And even though your kidneys filter pee, it’s not completely sterile. It does contain some bacteria.

Even if urine were sterile before hitting the bladder, it would contain microbes by the time the body expelled it.

So how gross is it to pee in a pool?

That means that not only is there pee in the pool, but peeing in the pool degrades the chlorine’s ability to fight other germs.

“Since pee is waste that is removed from the body, it is not a good idea to be swimming in any water that contains it,” he says. “Pool water can easily enter the nose or the mouth of people, especially children, and should be kept clean and bacteria free as much as possible.”

What happens when you pee in the pool

Not only is peeing in the pool unsanitary for yourself and others, but in some people, it can also cause more serious side effects, like asthma attacks, Dr. Sonpal says.

That’s right: the pool can actually make you sick.

That’s because studies have found that certain components of pee can chemically react with the chlorine and create chloramines, disinfectants that are toxic to humans and can cause irritation of the eyes, skin, and air passages, he says.

One study in the journal Environmental Science and Technology found that the nitrogen in pee reacts with chlorine, forming cyanogen chloride, which may act like tear gas.

And other research on competitive swimmers points to higher rates of respiratory health problems, according to Current Medicinal Chemistry.

Urine isn’t the only culprit

Poop, sweat, dirt, skin cells, and personal care products, such as deodorant and makeup, may also combine with chlorine to make chloramines, per the Centers for Disease Control and Prevention (CDC). And there are plenty of other pool dangers too.

Swimmers may inhale or come into contact with chloramines that may cause red or itchy eyes, skin rashes, or irritation.

So, don’t pee in the pool

We’ll say it again: don’t pee in the pool.

“It is easy enough to get out of the water and use a proper bathroom and can save yourself and others from uncomfortable and dangerous side effects,” Dr. Sonpal says.

If being considerate doesn’t convince you not to pee in the pool, consider that the average adult swallows a tablespoon of pool water after 45 minutes of swimming, per the CDC. You can fill in the blank here.

So don’t pee in the pool, and don’t swallow the water. Keep pool water clean, and swimming will be a much more enjoyable (and safe) experience for all.

The post Peeing in the Pool Isn’t Just Gross—It’s Actually Bad for You appeared first on The Healthy.

Previous articleHow to Wash Lettuce Correctly (and Dry It)
Next articleCorn vs. Flour Tortilla: Which One Is Healthier?
RELATED ARTICLES
Health

What Do the Experts Say is the Best Skincare Routine

Pinched Nerve in Your Neck? Here are the Symptoms and Treatments

Is a Vitamin D Deficiency Causing Your Depression?