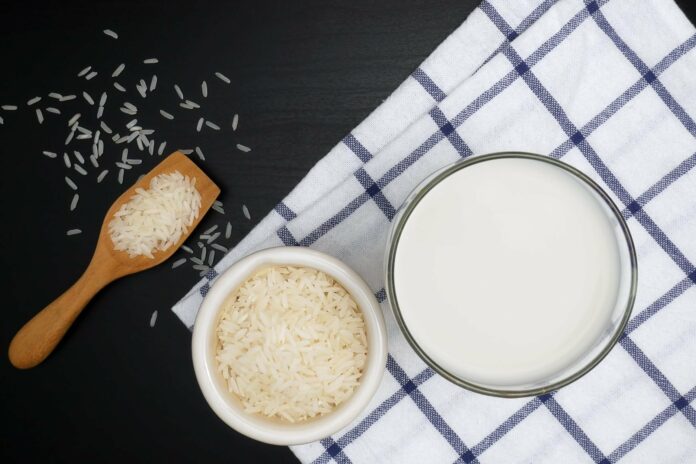 The rise of rice milk

These days, the question isn’t “Got milk?” but “What kind of milk have you got?” You can choose from dairy, almond, soy, oat, and countless others. Including rice milk. And the demand for plant-based milk is only growing.

The global rice milk market is estimated to reach over $250 million dollars by 2027, according to a report from market research firm Reports and Data. There are a few reasons its popularity is on the rise.

With increasing interest in vegetarian and vegan diets, consumers are choosing rice milk over dairy-based alternatives. In addition, those who suffer from food allergies and intolerances often find they tolerate rice milk better than dairy milk or soy options.

So, is rice milk nutritionally comparable to other milk alternatives? Here’s everything you need to know.

How is rice milk made?

When manufactured commercially, rice milk is typically made by pressing grains of rice through a grinding mill. It’s then strained and blended with water. The final product is often flavored with added sweeteners and fortified with nutrients.

You can also make rice milk at home, although the process looks a little different. You can use rice flour. Or you can boil rice, blend it with water, and strain it to create the final creamy beverage. The downside to homemade rice milk: It’s not fortified with nutrients you’d find in store-bought rice milk or other milk options.

Here are the nutrition facts, along with the recommended daily value (DV) for 100 grams (a little less than half a cup) of unsweetened rice milk:

When someone chooses to drink rice milk, they are often doing so as a substitute for more traditional milk options, such as cow’s milk. Although rice milk can be incorporated into your diet in many of the same ways cow’s milk and other milk alternatives can, it is not a comparable swap when it comes to nutrition. (Try these plant-based swaps.)

“One of the downsides to rice milk is that it is not as naturally nutritious as cow’s milk, so when choosing a rice milk be sure that it is fortified with nutrients including calcium, vitamin D, vitamin B12, and vitamin A,” says registered dietitian nutritionist Jasmine El Nabli, a health and wellness director for Parentis Health.

“Rice milk is not nutritionally equivalent to cow’s milk, as dairy milk contains 13 essential nutrients [only two of which are fortified: vitamin A and vitamin D], whereas rice milk generally contains two to four nutrients depending on what is added,” explains Marie Spano, RD, a sports nutritionist based in Atlanta and Washington, D.C.

Just because rice milk isn’t as nutrient-packed as cow’s milk or other plant-based milks doesn’t mean you have to give it up. In fact, there can be benefits to incorporating rice milk into your meal plan. This is especially true for individuals who suffer from food allergies or intolerances.

“Rice milk is the least allergenic compared to other plant milks, making it a better alternative for individuals with nut or soy allergies,” explains Nabli.

If you’re an athlete, rice milk can be a good way to refuel. It’s rich in carbs, with little fat or protein to slow digestion, which means it provides a quick source of fuel to the body. “Compared to other plant-milk alternatives, rice milk may be a good option for individuals with high energy needs, such as endurance athletes,” adds Nabli.

The downsides of rice milk

Although there are nutritional benefits to rice milk, it is not without its downsides. “One of the key nutritional differences between rice milk and cow’s milk is that rice milk contains double the amount of carbohydrates, with a high glycemic index,” shares Nabli. This is especially important for people with diabetes, who need to monitor the amount of carbs they get.

The glycemic index (GI) is a measurement of how quickly a food is converted into glucose, or sugar, in the body. The higher the GI of a food, the greater its impact on blood sugar. With rice milk containing a high GI—and without a lot of protein to slow digestion—it can cause a greater rise in blood sugar than cow’s milk.

You may have also heard about potentially dangerous arsenic levels in rice. It’s true that rice can have higher levels of arsenic in it than other crops. The Food and Drug Administration has been monitoring arsenic in rice for years and found it’s more common in brown rice than white. If you drink a lot of rice milk, one made from white rice may be a better option than one made from brown rice.

How to choose the best rice milk

When purchasing rice milk, there are a few things to look for on the label to ensure you select the most nutritious option. Since rice milk naturally falls short in key nutrients, such as calcium, vitamin A, and vitamin D, look for fortified varieties.

“Since dairy is the primary source of calcium in the diets of Americans, when choosing a dairy replacement drink, try to make up for calcium and some of the nutrients you will be missing,” says Spano. “Aim for a rice milk that contains at least 25 percent DV for calcium, 15 percent vitamin D, and 10 percent vitamin A.”

To prevent your rice milk from increasing your daily intake of added sugar, choose unsweetened varieties when possible. You can add your own sugar-free flavoring by topping your milk with a sprinkle of cinnamon or cocoa powder.

How to make rice milk at home

Whipping up a batch of homemade rice milk can be a great way to save money and control which flavors and ingredients are added to your drink. Thankfully, homemade rice milk is easy to make. The only equipment you need is a blender and a cheesecloth or nut milk bag. Here is Nabli’s go-to rice milk recipe.

4 cups water (use less water for a thicker, creamier milk)

The post Is Rice Milk Healthy? appeared first on The Healthy.

Previous article6 Reasons Women May Have More Covid-19 Vaccine Side Effects Than Men
Next articleShould You Use Collagen for Your Hair? What Experts Recommend
RELATED ARTICLES
Health

7 Dry Eye Treatments That Will Help You Feel Better Fast

What is Joyful Movement and How to Find Yours

Corn vs. Flour Tortilla: Which One Is Healthier?

What Is Intuitive Eating? A Beginner’s Guide to the ‘Anti-Diet’