Here Are the Benefits of Farm-Raised vs Wild-Caught Salmon 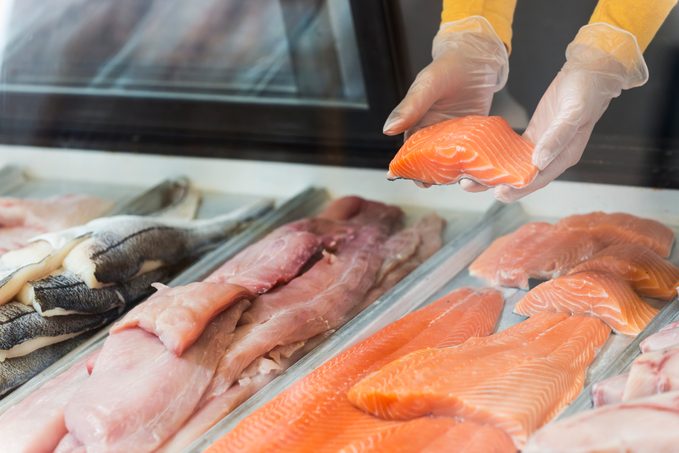 Choosing between farm-raised vs wild-caught salmon

You know salmon is good for you. But when it comes time to choose at the grocery store, it can be overwhelming.

There are a variety of types to choose from, and the advantages and disadvantages are often hotly debated.

How can you tell which is better for your health (and the health of the planet)? Should you eat farmed-raised salmon or wild-caught?

All food production requires resources that put pressure on the environment, explains Richard Waite, a senior research associate for the food program at World Research Institute.

To keep up with the increased interest in seafood while also being efficient with resources, fish farming is a necessity.

According to Waite, both farm-raised and wild-caught fish can be sustainable options. And, he says, by choosing seafood over beef, you’re already reducing your environmental impact since seafood requires fewer resources to produce compared to some other animal proteins, like red meat.

How much seafood should you eat?

Whether or not seafood is wild-caught or farm-raised, the latest version of the Dietary Guidelines for Americans recommends eating 8-ounces—about two servings—of seafood each week. According to a 2020 study published in the journal, Nutrients, these are the top five types of seafood consumed in the United States.

When eating wild-caught or farm-raised salmon, you may notice a difference in taste.

Farm-raised salmon is higher in fat, it’s richer and milder. Wild-caught salmon is known for having a ‘fishy’ flavor, but this is due to it being leaner. Many people appreciate its more robust taste.

If you have a preference for one over the other, consider that when shopping, and look for sustainable seafood whichever you buy.

While salmon is incredibly healthy and rich in anti-inflammatory omega-3 fatty acids, it’s important to vary your seafood choices.

Make it a goal to try another seafood option in addition to salmon to help you hit your seafood targets.

There are individual nutrient differences depending on the species and whether the fish is farmed-raised or wild-caught, but both forms are considered nutritious.

Rather than getting overly concerned over whether your fish is wild-caught or farmed-raised, think about how often you’re eating it.

Just 10 to 20 percent of Americans meet the recommendation to eat fish twice a week, according to the Nutrients study. So, from a nutrition standpoint, consuming more sustainable seafood is a priority goal.

One key difference between farmed and wild fish is that wild fish may only be available during certain seasons, whereas farmed fish is available year-round.

Of course, the benefit of this is that you can enjoy your favorite fish throughout the year. (Here’s why you should consider buying frozen fish.)

Here’s a closer look at the nutrients in a 3-ounce (85 grams) serving of cooked, dry heat farm-raised vs wild-caught Atlantic salmon.

According to the Environmental Protection Agency (EPA), seafood may be tainted with chemical and biological contaminants.

The chemical pollutants of the most concern are mercury, polychlorinated biphenyls (PCBs), and the pesticide dichloro-diphenyl-trichloroethane (DDT).

These substances make their way into the water and then into the fish themselves. Contaminants from human and animal waste and marine toxins can also compromise seafood.

These safety concerns are greater for vulnerable populations, such as pregnant and nursing women, young children, the elderly, and immune-compromised individuals.

Still, that doesn’t mean you need to avoid seafood, even if you fall in one of these vulnerable populations. In fact, the levels are so low the advice to eat seafood twice a week still stands.

Pregnant and nursing mothers and young kids should vary their choices and limit those known to contain somewhat high levels of mercury to once per week. The Food and Drug Administration (FDA) and the EPA advise high-risk people to avoid high-mercury species—like swordfish, orange roughy, and king mackerel—altogether.

A 2020 report in the journal, Foods, says the presence of DDT and PCBs in our food supply has been declining for 30 years.

Indeed, currently, wild salmon has three times the amount of PCBs as farmed salmon, but even at that amount, wild salmon is considered to have a negligible contribution.

Why you should choose sustainable seafood

Sustainable seafood—whether wild-caught or farmed-raised—is the way to go. Few Americans meet the recommendation to eat seafood twice a week, so focus on eating more sustainable seafood and worry less about whether it’s farm-raised or wild-caught. Both forms fit into a nutritious diet.

A 2018 review paper published in Frontiers in Ecology and the Environment found that salmon farming rates well across several environmental metrics.

For example, vaccines developed for farmed salmon have significantly reduced antibiotic use—by up to 95 percent in certain regions, like Norway, and there have been steps to mitigate certain diseases.

Use a guide like the Monterey Bay Aquarium Seafood Watch or Environmental Defense Fund’s Seafood Selector to get a sense of seafood choices that have a lower impact on the environment, and do your part to reduce food waste.

If you’re eating fish, you’re already choosing an animal protein with a lower environmental impact, so use tools like this to help guide you, but don’t agonize over the decision.

Also, make room on your plate for other plant foods, which will further reduce your environmental impact and boost your nutrient intake.

The post Here Are the Benefits of Farm-Raised vs Wild-Caught Salmon appeared first on The Healthy.

Previous articleAll About Migraines: Triggers, Treatment, Prevention, and More
Next articleHere’s What You Need to Know About Psoriasis Symptoms, Causes, and Treatments
RELATED ARTICLES
Health

Hair Loss and How to Avoid it

What is Oxidative Stress and Should You Worry About It?

Chlorella vs. Spirulina: Which One Is Right for You?