COVID-19 and Black Fungus: 10 Things You Need to Know 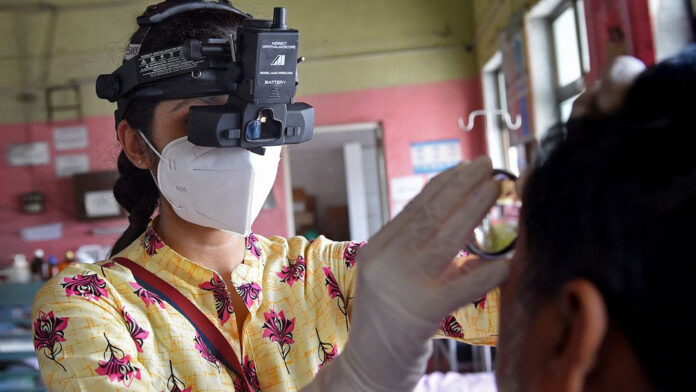 Thousands of people in India who’ve battled COVID-19 are dying from a rare infection called black fungus. Here’s the latest on India’s COVID-19 crisis, the diabetes link, and what this all might mean for you.

Mucormycosis, a dangerous infection known as black fungus, is threatening to disrupt India’s progress in ending the second wave of COVID-19. In an unfortunate form of double jeopardy, black fungus seems to pose the greatest threat to those who have recovered from the virus.

“This is an extremely serious infection that’s very difficult to treat,” says Robert Cyril Bollinger Jr., MD, MPH, the Raj and Kamla Gupta Professor of Infectious Diseases at Johns Hopkins Medicine in Baltimore. “In people with confirmed cases, the infection causes death more than 50 percent of the time,” he says.

As of June 7, COVID-19 has claimed the lives of more than 350,000 people in India, and the estimated number of confirmed cases in the country is approaching 30 million, according to the World Health Organization (WHO). Many experts believe those figures could actually be as much as 5 to 10 times higher, says Priya Sampathkumar, MD, an infectious-disease doctor at Mayo Clinic in Rochester, Minnesota. “Many people are dying before they even get to the hospital, so they’re not being counted as COVID-19 deaths,” says Dr. Sampathkumar.

India’s COVID crisis has also improved in the last few weeks because of the availability of medical supplies, including oxygen, says Dr. Bollinger. “However, there does appear to be an uptick of COVID-19 in some of the rural areas, which presents a new challenge because these places have fewer resources,” he says.

The surge of black fungus infections presents another complication, with current estimates as reported by the BBC at 12,000 cases and counting. “They are seeing many more cases than what they would usually see, and it’s happening in people who have recently recovered from COVID-19,” says Bollinger.

10 Questions and Answers About COVID-19 and Black Fungus

Here, experts address the connection between COVID-19 and black fungus, describe black fungus symptoms and treatment, and explain who is and isn’t at risk.

1. What Is Black Fungus?

Mucormycosis is a fungal infection caused by a group of related molds known as mucormycetes, according to the Centers for Disease Control and Prevention (CDC). These fungi exist in the environment all over the world, especially in soil and decaying organic matter such as leaves, compost piles, or rotten wood.

In general, they don’t cause a problem for humans except in specific circumstances, says Bollinger.

2. What Are the Risk Factors for Black Fungus?

In addition to the rise of black fungus cases in India in people who have recovered from COVID-19, mucormycosis risk is higher for people with diabetes, especially diabetic ketoacidosis; those on immune-suppressant drugs; those who had cancer, particularly hematologic or blood type cancers; and those with weakened immune systems.

“Even before COVID-19, India has reported higher rates of mucormycosis than a lot of other countries. We’re not really clear on the reason for that, although it could be that India also has the largest burden of people with diabetes in the world,” Bollinger says. There may be environmental factors that impact exposure, including weather, he says.

People with type 1 and type 2 diabetes who aren’t able to manage their blood-sugar levels are at risk — “it’s anybody who has high sugar levels,” says Bollinger. The good news is that people who have well-managed diabetes have a low risk of this infection.

3. What Are the Symptoms of Black Fungus?

The symptoms of mucormycosis can differ depending on whether the fungus is growing in the sinus or brain area, the lungs, the skin, or the gastrointestinal (GI) system, according to the CDC.

In the sinuses, symptoms include one-sided facial swelling, headache, nasal congestion, black lesions on the nasal bridge or upper inside of the mouth, and fever.

When black fungus is in the lungs, symptoms include cough, chest pain, shortness of breath, and fever.

Skin mucormycosis can look like blisters or ulcers, and the infected area may turn black. Pain, warmth, redness, and swelling around a wound can also be symptoms.

Symptoms of GI mucormycosis include abdominal pain, nausea and vomiting, and GI bleeding.

4. How Is Black Fungus Treated?

Doctors treat black fungus very aggressively, says Bollinger. “First, if [patients] have diabetes you have to get their blood sugar under control, and if they are taking steroids those need to be tapered,” he says.

Surgery to remove the fungus is typically required, says Bollinger. He explains: “You have to go in and basically cut out as much of the fungus as you can. In about 40 percent of cases, black fungus causes an infection in the sinuses that can erode the sinuses and actually go into the brain.” In some cases, the eye or jawbone must be removed to stop the spread of the fungus.

Finding facilities and the specialists who are available to perform this specialized surgery may present a challenge in some parts of India, according to Bollinger. “What I’m hearing is that there are certain hospitals that are getting most of the referrals, and so those particular hospitals are getting overwhelmed with patients with mucormycosis,” he says.

The number-one drug to treat this infection is amphotericin B, which is a powerful antifungal that has to be delivered into a vein, says Bollinger. “It’s in short supply in India right now because there have been many more cases than would be expected,” he says.

Black fungus doesn’t spread from person to person, according to Bollinger. “We’re probably coming into contact with these organisms all the time in the environment and on surfaces, but most people are not susceptible,” he says.

“I think many of us suspect that the surge of mucormycosis is primarily being driven by people who didn’t know they had diabetes contracting the COVID-19 infection. These people have high blood sugar levels and that puts them at risk for mucormycosis,” Bollinger says.

Steroids that are used to treat COVID-19, such as dexamethasone and methylprednisolone, could also help explain the increase in black fungus, says Bollinger. “We are hearing anecdotes that steroids are being used much more frequently in patients with COVID-19 in India. We know that taking steroids, particularly if you have diabetes, increases your risk for this infection, and it also increases the sugar level in your blood if you have diabetes,” he says.

Part of the problem may be physicians’ overprescribing steroids, but drugs are also regulated differently in India, notes Bollinger. “Oftentimes patients can go directly to the pharmacy and buy drugs, including steroids to treat COVID,” he says.

It’s not clear that steroid use is the entire reason for the large incidence of black fungus, he adds. “I’m sure there are people presenting with this infection after having COVID-19 who never had steroids and may not even have diabetes — we just don’t have all the data yet to know that,” he says.

7. Does COVID-19 Increase the Risk of Black Fungus?

On June 4, The Times of India reported that in Jaipur, at least 27 percent of black fungus cases were diagnosed in people who tested positive for COVID-19, which indicates that the infection is not entirely a post-COVID-19 complication.

8. Could Unsanitary Conditions in Hospitals Be a Factor?

It’s hard to say if the cleanliness of hospitals or other conditions are contributing to people getting mucormycosis, says Bollinger. “There have been reports in the past — even before COVID-19 — of small outbreaks of the infection because of contaminated equipment,” he says.

It’s possible that sharing equipment such as ventilators without proper cleaning could contribute to greater exposure to black fungus, but that needs to be further studied, says Bollinger.

9. Should People in the U.S. Who Have Diabetes or Are Immunosuppressed Be Concerned About Black Fungus?

People with weakened immune systems have a higher risk of many types of fungal infections, according to the CDC. But it’s important to note that black fungus isn’t a new infection that could “spread” to the United States from India. “Mucormycosis is here in our country, but there are only a handful of cases in the U.S. every year,” Bollinger says.

Although there hasn’t been an increase of black fungus in the United States, healthcare workers have observed that people who have recovered from COVID-19 are at higher risk for other fungal infections, says Bollinger. “There’s a fungal infection called aspergillosis that we’ve seen in post-COVID-19 patients. Many of these people were treated with steroids and had been on ventilators, both factors that increase the risk of aspergillosis. Aspergillosis also has some of the same risk factors as mucormycosis, such as high sugar levels,” says Bollinger.

10. What Can the U.S. and Other Countries Learn From India’s Pandemic Nightmare?

There are important lessons to learn from what’s happening in India right now, says Bollinger.

“One thing is that we have to be very strategic and careful in how we manage the risk factors for fungal diseases like mucormycosis and aspergillosis, both in patients with COVID-19 and those without it,” he says.

“One of the things we’ve been stressing with our colleagues is to make sure that steroids are only given to people with COVID-19 who actually need it, which is the small subset of people who have low oxygen levels from the infection,” Bollinger says. If you have COVID-19 but you don’t have low oxygen, you shouldn’t be prescribed steroids, he adds.

Finally, physicians in the United States and other countries need to continue to study the black fungus crisis in India to better understand how their own patients can be managed to reduce that risk, says Bollinger.

Brain Fog: A COVID-19 Symptom That May Linger

RSV vs. COVID-19: Symptoms to Watch For, According to Doctors