Corn vs. Flour Tortilla: Which One Is Healthier? 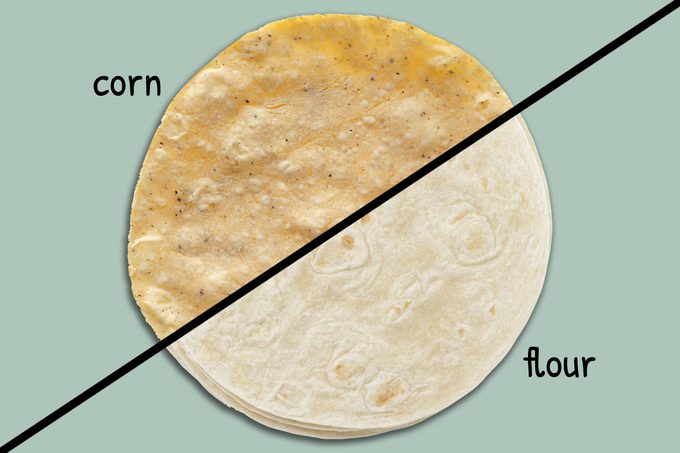 Experts are telling you to eat more non-starchy veggies, like tomatoes; focus on healthy fats, like in avocados; and try (at least occasionally) to use beans in place of meat.

Sounds like taco time. Or maybe it’s fajita, burrito, quesadilla, or enchilada night. Whichever the choice, they all begin with the tortilla.

A tortilla is basically a thin, soft flatbread traditionally based on corn or wheat. They originated in Mexico, and have been a staple for hundreds of years.

Tortillas come in a variety of sizes, which you’ll ideally pick based on your culinary need. In other words, a footlong tortilla is way too big to make a tidy, hand-held street taco.

And while certain recipes work best with corn tortillas, some are better matches for flour tortillas, and still others are interchangeable.

Culinary preference aside, is one type of tortilla healthier than the other? Let’s find out.

What is a corn tortilla?

“Corn tortillas are a whole-grain food,” says Christy Wilson, RDN, a nutrition counselor at the University of Arizona’s Campus Health Service in Tucson. “They’re traditionally made from ground field corn (maize) that’s then made into masa harina.”

It’s not like using corn straight from the cob.

The tortillas are typically made by combining masa harina (finely ground cornmeal) with warm water and sometimes salt, forming the mixture into dough, and then portioning into individual balls. The masa dough balls are then pressed into tortillas, ideally using a tortilla press.

The final step is cooking the tortilla in a hot, cast iron pan or comal (griddle) until golden brown and puffy, no more than a couple of minutes per side.

While often yellow, the tortillas may also be naturally white, blue, or purple, based on the cornmeal chosen. Yes, blue and purple corn exist in nature—no artificial colors are involved.

Sound like fun? Follow this tutorial to make your own corn tortillas? Try Maseca Instant Yellow Corn Masa Flour as the main ingredient.

What is a flour tortilla?

Flour tortillas are often made from all-purpose white flour. That’s wheat, but it’s not a whole-grain food.

The tortillas are often made by combining flour, warm water, vegetable oil (or shortening or lard), salt, and sometimes a bit of baking powder.

It involves kneading the ingredients into a smooth dough, portioning the dough into individual testales (small disks), and rolling out the disks into individual tortillas. The tortillas are quickly cooked in a hot, cast iron pan or comal (griddle) until golden brown in spots, which takes just one minute (or less) per side.

Other flours can be swapped in place of white flour. Whole wheat pastry flour works well as a replacement, providing whole grain goodness, including fiber.

Want to make your own flour tortillas? Try this homemade tortilla recipe. Using oil rather than shortening or lard makes them heart friendlier.

Both types of tortillas offer a variety of nutrients. Based on an equal weight, here’s how their nutrition stacks up. Putting this info into practice, remember that you usually won’t be eating equivalent amounts.

Factor size into your selection; the larger the tortilla, the greater the calories. Luckily, you’ll get more nutrients along with those calories, of course.

A 1-ounce (28.35 gram) corn tortilla has the following nutrients and daily values (DV):

In fact, you’ll get about half of your recommended daily dose of magnesium from a 1-ounce corn tortilla.

Magnesium plays a key role in muscle and nerve function, protein synthesis, and energy production. Plus, the mineral is “good for bone health and a healthy, steady heart rate,” says Wilson.

Thanks to wholesome corn, you’ll find beta carotene, betaine, lutein, and zeaxanthin, among other health-protective antioxidants.

Lutein and zeaxanthin are highly beneficial carotenoids for eye health. They may reduce the risk of age-related macular degeneration, which can lead to blindness.

Wilson points out that the white flour used in traditional flour tortillas is enriched with nutrients.

You’ll find significant amounts of magnesium, selenium, and the B vitamins thiamin and folate in the tortillas.

Women who don’t get enough folate are at greater risk of giving birth to babies with neural tube defects.

Since women of childbearing age and non-Hispanic Black women are at risk for an inadequate intake of folate, flour tortillas may be the preferred choice for them to help avoid a deficiency.

Match your tortilla to your diet

Corn tortillas may be the ideal pick when following a vegan, gluten-free, or low-calorie eating plan.

That’s because authentic flour tortillas are sometimes made with lard (that’s pig fat, so incompatible with a vegan diet) and they’re based on wheat, which contains gluten.

They tend to have more calories than corn tortillas (although check the nutrition information on the package).

Wilson adds that corn tortillas are low in calories because they’re smaller than a typical flour tortilla too.

And if you want to fry up a batch of tortilla chips, Wilson says that “the thick texture of corn tortillas works really well.”

The larger, softer, and more-pliable flour tortillas are great for stuffing and rolling to make burritos. They’re also ideal for sandwich wraps.

“Meats, eggs, cheese, rice, guacamole, salsa, beans, vegetables, and cilantro can all be packed in and rolled into a big flour tortilla,” says Wilson.

Got high-energy needs? A flour tortilla is your friend.

“You can safely hold a few pounds of food in your hand when it’s wrapped inside of a warm flour tortilla,” she says. “Physically, they’re much larger (up to 24 inches in diameter) and can carry more food.”

How to shop for tortillas

Before plopping a package of tortillas into your shopping cart, here are some things to consider.

Buy based on what you’re cooking

“I will buy a particular type [of tortilla] depending on what I’m serving them with,” says Wilson. “If it’s tacos I’m making, corn is it; if I’m making chicken quesadillas as my meal, I’ll go with larger, flour tortillas.”

Don’t be tricked by color

Sometimes a color is an indicator of healthfulness. But not always.

“Although added vegetables to a favorite food like tortillas may sound ‘healthy,’ check the ingredient list. Oftentimes it’s the last ingredient listed, which indicates there isn’t much of it,” says Wilson.

More often than not, your “veggie” tortillas add little in the way of nutrition and simply offer you a different color.

The cornmeal used in corn tortillas is based on the whole corn kernel.

The all-purpose (white) flour often used in flour tortillas doesn’t use the whole wheat kernel—it’s stripped of the germ and bran, which strips away some antioxidant benefits and fiber.

In addition to various types, sizes, and colors of corn and flour tortillas, there are nutrient-rich additions. And a growing number of options don’t contain corn or flour at all.

Here are the newest finds you might want to try:

La Tortilla Factory offers a wide array of tortillas, including whole wheat protein tortillas that use a pea and rice protein blend.
Siete Foods has grain-free tortillas featuring chickpea flour, almond flour, or a blend of cassava and coconut flours.
Angelic Bakehouse makes sprouted whole grain wraps/tortillas that contain juiced or dried veggies.
Mission Foods has a line of organic tortillas.
Caulipower offers (you guessed it) cauliflower tortillas made with or without grains.

Corn vs. flour tortilla: Which is healthier?

Though there’s an enticing array of tortillas available on the market today, the most popular picks are still traditional corn or (white) flour tortillas.

They both offer a bevy of nutrients, but there is a best overall pick.

“If we’re strictly talking about health and nutrition, corn tortillas are a few steps ahead of flour because they’re higher in fiber, calcium, and magnesium and lower in total carbohydrates and calories,” says Wilson.

Plus, corn tortillas are higher in antioxidant power, considered slightly less processed, and gluten free. They’re the way to go if these are important attributes for you.

“Although, because [corn tortillas] are smaller, the ultimate risk is eating several in one sitting,” says Wilson. “So, as always, be mindful of your portions.”

In any case, don’t stress out over tortilla selection.

Whether your preference is a corn or flour tortilla (or both at once), know that you can’t go wrong by stuffing your tortilla of choice with boatloads of veggies, beans, and a luxurious dollop of guacamole.

The post Corn vs. Flour Tortilla: Which One Is Healthier? appeared first on The Healthy.

Does an Apple a Day Really Keep the Doctor Away?