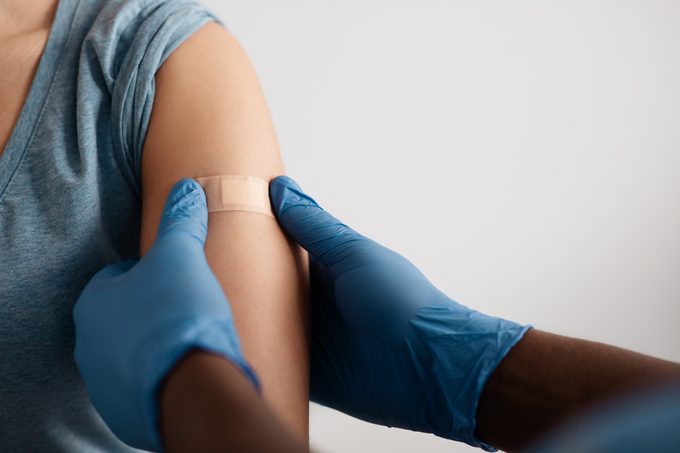 The three Covid-19 vaccines approved for use in the United States were developed in record time, leading some people to surmise that they carry significant risks. This is not true.

No steps were skipped and tens of thousands of people safely made it through clinical trials.

We should be even more reassured now. More than 245 million doses of the Covid-19 vaccine have been administered in the United States and more than a billion have been given worldwide.

The risk of severe—let alone life-threatening—reactions to any one of the Covid-19 vaccines is astonishingly low.

In fact, a study published in The Lancet in April found that the side effects were even lower in the real world than they were in clinical trials.

However, you should still know what to expect after the jab.

We can’t overstate the importance of vaccines if we’re ever going to stop wearing masks and practicing social distancing. So far, the Covid-19 vaccines have exceeded anyone’s expectations in terms of helping to do that.

Clinical trials showed the two-dose Moderna and Pfizer-BioNTech vaccines are each about 95 percent effective in preventing symptomatic disease two weeks after getting both doses.

In comparison, the annual flu vaccine is only 40 percent to 60 percent effective.

“This is our best way to get back to normal,” says Ghazala Q. Sharieff, MD, chief medical officer clinical excellence and experience at Scripps Health in San Diego.

Side effects are normal

Side effects aren’t unexpected, not just with the Covid-19 vaccines but with all vaccines, says Katherine L. Baumgarten, MD, medical director of infection control and prevention at Ochsner Health in New Orleans.

In fact, many of the most common Covid-19 vaccine side effects are the same we see with other immunizations. That’s because they’re a sign that your immune system is doing what it’s supposed to do, which is develop a fighting capability for the real virus.

“It doesn’t feel good, but you know that your body is building an immune response,” says Dr. Baumgarten.

However, lots of people have no side effects at all. That doesn’t mean the vaccine isn’t working, just that everyone is different.

By far the most common and least worrisome side effect of any vaccine is a sore arm, particularly where the needle went in.

Some people have said that the Covid-19 vaccines, in particular, pack a punch (or feel like one). You may also have some redness and a bit of swelling. (Here’s what your doctor wishes you knew about vaccines.) So a sore arm is nothing to be alarmed over.

The person administering your vaccine will ask you which arm you’d like to get the shot in. You may want to choose your nondominant side so the soreness doesn’t affect your daily life.

The best way to deal with a sore arm is by putting something cold, like a wet washcloth or ice pack, against the injection area. That can help ease a sore arm, as can moving it around.

Side effects do seem more common after the second dose of the Pfizer-BioNTech or Moderna vaccine. That’s because your immune system is better prepared than it was the first time to attack the intruder. (The Johnson & Johnson vaccine is a single dose.)

In effect, your immune system is in high gear, and your side effects could be more noticeable. However, even these effects should go away in a day or two.

The CDC does not recommend taking over-the-counter painkillers like acetaminophen or ibuprofen before the shot, just in case they interfere with the vaccine.

After the shot, “you can take a pain reliever if the effects are debilitating or difficult to tolerate,” says Dr. Baumgarten.

If you have a fever, rest and drink plenty of fluids. You can also take a cool bath.

Call your doctor if any side effects get worse after 24 hours or don’t go away within 72 hours. An exception is swelling and pain in your arm.

“Some very small-scale studies are showing a delayed reaction a week after the vaccine,” says Dr. Sharieff. “It’s all part of the immune response.”

Fatigue is not uncommon after getting a vaccine.

In fact, about 8% of people reported fatigue after the first Pfizer dose and 14.4% after the second shot, according to the study in The Lancet, which gauged reactions in more than 600,000 people up to eight days after the vaccine.

This and other systemic side effects like headaches and muscle pain were seen more in women and in people 55 and younger.

Take it easy and “rest when you need to,” advises Dr. Baumgarten.

Some people mistake vaccine side effects like headache—for symptoms of actual Covid-19 disease.

This is wrong. There is no way to get Covid-19 from the vaccine because, explains Dr. Sharieff, “there’s no live virus in any of them.”

It is possible to develop Covid-19 after the vaccine but not because of it.

Typically this is because you were actually exposed to the virus before getting the vaccine or before your immune system has had a chance to ramp up.

About 13 percent of people in The Lancet study report getting a headache after the second Pfizer vaccination. Your best remedy is the simplest.

About 3.5% of people complained of nausea after the second shot.

Some have even reported vomiting.

This is the time to stay well hydrated (is there ever a bad time?) and reach for any solutions that have worked for nausea before.

If the pain gets to be too much, reach for the same pain reliever you might use for a headache: namely an NSAID or acetaminophen, recommends Dr. Baumgarten.

Unlike other vaccine side effects that typically only last a day or two, swollen lymph nodes “do take a little longer to resolve than other common side effects, usually several weeks in my experience,” says Dr. Baumgarten.

In fact, experts recommend that you delay getting a mammogram for 4 to 6 weeks after a Covid-19 vaccine because swollen lymph nodes in an armpit could lead to a false positive on a mammogram.

If they’re tender and sore, try an over-the-counter pain reliever.

Early in the vaccine rollout, several people had severe anaphylactic (allergic) reactions after getting one of the mRNA vaccines (Pfizer-BioNTech or Moderna).

All of the reactions occurred in people who had a history of serious allergic reactions. All events happened within minutes of having the vaccine, and all were successfully treated with epinephrine (EpiPen).

In general, allergies to medications are common, says Dr. Baumgarten.

That’s why many vaccine intake forms ask if you’ve ever had a serious allergic reaction. It’s also why you’ll wait around for 15 to 20 minutes after getting the shot—just to be safe.

“If you tell me you have a history of allergic reactions to anything, I’ll watch you for 30 minutes after getting the vaccine as an extra precaution,” says Dr. Sharieff.

People who have a severe allergic reaction to the first shot should talk to a specialist before getting a second dose.

Rare blood clots with some types

On February 13, the Food and Drug Administration paused administration of the Johnson & Johnson vaccine after reports of blood clots in women, some of them fatal.

This followed reports of blood clots among recipients of the AstraZeneca vaccine in Europe. Both vaccines rely on the same technology.

But the pause was lifted on April 23 after a review found that the benefits of the vaccine still greatly outweighed the risks. The agency did, however, add a warning to the product.

The Israeli government is looking into 62 cases of myocarditis (inflammation of the heart muscle) in vaccine recipients. Another 14 cases have been noted among U.S. military members. It’s not clear whether the events are the result of the vaccine, and the CDC has stated that it sees no link.

So far, the rate of myocarditis after a vaccine is about one in 100,000 vaccines, mostly in men under the age of 32 and most after the second dose.

“They don’t know if this is above and beyond what would happen in the normal population,” says Dr. Baumgarten.

Viral infections can cause myocarditis, although many times the reason is never discovered.

Symptoms of myocarditis include shortness of breath, especially after exercising or when lying down, fatigue, chest pain, heart palpitations, and swelling in your hands, legs, ankles, or feet.

The post 7 Totally Normal Covid-19 Vaccine Side Effects to Be Ready For appeared first on The Healthy.

Previous articleThe Best Contacts for Dry Eyes, According to Doctors
Next article7 Signs Your Ankle Pain May Be Gout
RELATED ARTICLES
COVID-19 / Coronavirus

RSV vs. COVID-19: Symptoms to Watch For, According to Doctors

The US is about to reach a surprise milestone: too many...