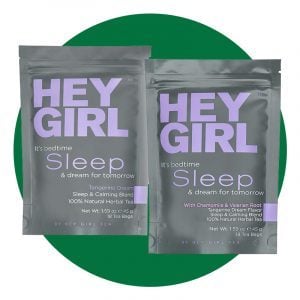 Counting sheep, limiting artificial light at night, and taking melatonin are just a few of the many ways people try to get better sleep.

About 70 million Americans deal with chronic sleep problems, according to the Centers for Disease Control and Prevention (CDC). So it makes sense that they’re willing to do almost anything to make sleep less elusive.

One super-easy fix? Swapping caffeine for a calming cup of herbal tea that helps you sleep.

Before you load your pantry with boxes of tea for sleep, learn why tea may promote rest and which teas are most likely to send you to dreamland. We lay out the basics below.

Reminder: good sleep comes down to quantity and quality. You need to catch enough z’s each night and avoid a restless slumber

Good sleep comes from good sleep hygiene, according to Raj Dasgupta, MD, a fellow of the American Academy of Sleep Medicine and assistant professor of clinical medicine at the University of Southern California’s Keck School of Medicine.

For most people, good sleep hygiene involves keeping the bedroom dark, cool, and quiet. It may also include following a sleep routine that aims for relaxation before bed.

To unwind and calm down before hitting the sack, you might take a warm bath or even drink a cup of tea.

Finding what works for you may, in part, come down to perception, says Dr. Dasgupta.

If you believe one particular tea makes you feel more comfortable and relaxed at night, it’s likely the best tea to help you ease into slumber.

“You have to find the missing puzzle piece that works for you,” he says.

Tea is an add-on, not a solution

Tea may be one of the best drinks that help you sleep, but it’s not necessarily a solution to or substitute for fixing major sleep problems.

Without a strong sleep foundation, like consistently waking up and going to bed at the same time each day, a cup of tea won’t fix your sleep issues.

“It’s very important to realize that the tea itself is never a cure-all for getting good sleep,” Dr. Dasgupta says. “It’s going to be an add-on to your sleep routine at night.”

The science of tea for sleep

Dr. Dasgupta says that the evidence for tea’s sleep-promoting propterties is mixed and limited.

It’s hard to get a consensus because the research has so many variables. It’s challenging to quantify dosages of tea and compare different forms (like powder or extract), according to Dr. Dasgupta.

“The limitations of [tea research] are what dose? What form?” he says. “All those things are confounders and why the evidence isn’t very robust.”

In short, the outcomes are subjective.

“It’s really hard to have objective measures when we talk about how people slept last night,” Dr. Dasgupta says.

That said, there is some information on the following types of tea.

Chamomile is one of the first teas that comes to mind when people think of sips that promote sleep. And for good reason.

Dr. Dasgupta says chamomile works on the same receptors in the brain that antianxiety medications like benzodiazepines do. And it has some anti-inflammatory properties, too, he says.

The calming effects of this tea tie to apigenin, an antioxidant in chamomile that may decrease anxiety and initiate sleep, according to a review published in Molecular Medicine Reports.

In a study published in the Journal of Advanced Nursing, researchers randomly asked 40 postpartum women who had poor sleep quality to drink chamomile tea for two weeks. At the end of the trial, the women reported better sleep quality and fewer symptoms of depression than 40 women who didn’t drink the tea.

But four weeks later, there were no differences in the two groups, suggesting chamomile tea’s sleep benefits are immediate but don’t last long.

Another benefit of chamomile tea: unlike black or green teas, it’s herbal and non-stimulating.

It’s already well known that lavender is a relaxing scent. And the effect of this herb may potentially help you relax for before bed.

A study on 80 postnatal women with poor quality sleep found that those who smelled and then sipped lavender tea every day for two weeks were less fatigued and depressed than those who did not, according to Worldviews on Evidence-Based Nursing.

It’s worth noting that the study did not directly look at the tea’s impact on sleep. And four weeks after the study, both groups were back to similar levels of fatigue and depression, a sign the benefits of lavender tea are short lived.

They found that receiving 600 milligrams of lemon balm extract per day for 15 days lowered insomnia by 42 percent. And 85 percent of the people achieved full remission for insomnia.

An important caveat is that the study didn’t include a control group.

Passionflower herbal tea might give chamomile a run for its money.

One trial in Psychotherapy Research investigating passionflower tea and sleep quality found that the beverage may be beneficial for healthy adults with mild fluctuations in sleep quality.

The researchers looked at 41 adults and found that participants reported better sleep quality when they drank passionflower tea every day for a week than when they didn’t.

Other research on the combination of passionflower and valerian root (more on that in a second) compared it to Ambien, a prescription sleep medication for insomnia treatment.

An Indian Journal of Pharmacology study gave people with insomnia either an herbal extract of passionflower and valerian root or zolpidem (generic Ambien.)

They found that the herbal mix was as effective as Ambien in improving sleep quality, without causing and daytime drowsiness.

One trial in the journal Menopause looked at the impact of valerian root on sleep quality in 100 postmenopausal women.

One group of women received 530 milligrams of concentrated valerian extract, while another group took a placebo twice a day for four weeks.

Researchers found that 30 percent of the women taking valerian showed an improvement in their sleep quality. And similar research on women going through menopause points to the same sleep benefits.

And older research from the 1980s in Pharmacology Biochemistry and Behavior also points to the benefits of valerian root for sleep.

The best tea for sleep

If you’re an avid tea drinker or looking to try anything for a good night’s sleep, here are some of the best bedtime teas to help you sleep better.

No matter your gender identity, this tea from Hey Girl is the perfect way to wind down for sleep.

It features some of the best herbs that help you sleep, including passionflower, chamomile, lemon balm, and valerian root, in addition to orange peel, catnip herb, and a little stevia.

Bigelow Tea has a delicious herbal option for nighttime. The Sweet Dreams blend includes sweet chamomile flowers and mint herbs for a calming and delicious tea.

Plus, out of more than 2,000 Amazon reviews, more than 80 percent are five stars.

Traditional Medicinals has many great tea options, but its best option for sleep is the Organic Nighty Night Valerian Tea.

This earthy, minty herbal tea is caffeine free and certified organic too.

This herbal tea blend from VitaCup is a great way to chill out during your bedtime routine.

It contains rooibos and chamomile teas, plus a medley of lavender, lemon balm, and a hint of peppermint and vanilla.

Although the name is Yogi, you don’t need to strike a pose or go into downward dog to enjoy this tea for sleep.

The spicy-sweet herbal tea blend combines passionflower and chamomile with licorice, cardamom, and cinnamon for a delicious tasting cuppa.

Plus, it also has an 87 percent five-star rating on Amazon.

The Republic of Tea Get Some Zzz’s

This caffeine-free tea from the Republic of Tea features all the best herbal ingredients for good sleep, including chamomile, passionflower, and valerian.

Caffeine-free tea with passionflowers is a great combination for bedtime tea.

This one from Adanim Bio contains no preservatives or artificial sweeteners either.

This mild and citrusy lemon balm tea from Traditional Medicinals is perfect before hitting the sack.

This tea contains no caffeine and only high-quality herbs.

If you like the scent of lavender and want to try it in tea form, but don’t want to drink a highly perfumed cup of tea, this tea from Buddha Teas is a good option.

This organic tea is earthy yet subtle. And it contains no artificial flavors, preservatives, or additives either.

You can’t go wrong with the classics, which goes for Harney & Sons teas—and chamomile tea in general.

The caffeine-free chamomile tea has a light, floral smell with a subtle aroma of apples.

The reviews on Amazon speak for themselves: more than 85 percent of the 12,590 ratings are five stars.

A soothing tea that combines two great ingredients for sleep? That’s this option from Bigelow Tea. It features lavender and chamomile with a hint of honey.

The post 11 Best Bedtime Teas to Help You Sleep appeared first on The Healthy.

Here Are 8 Foods That Can Trigger Migraines

What Is a Nervous Breakdown? 7 Symptoms to Know, According to...

What Do the Experts Say is the Best Skincare Routine